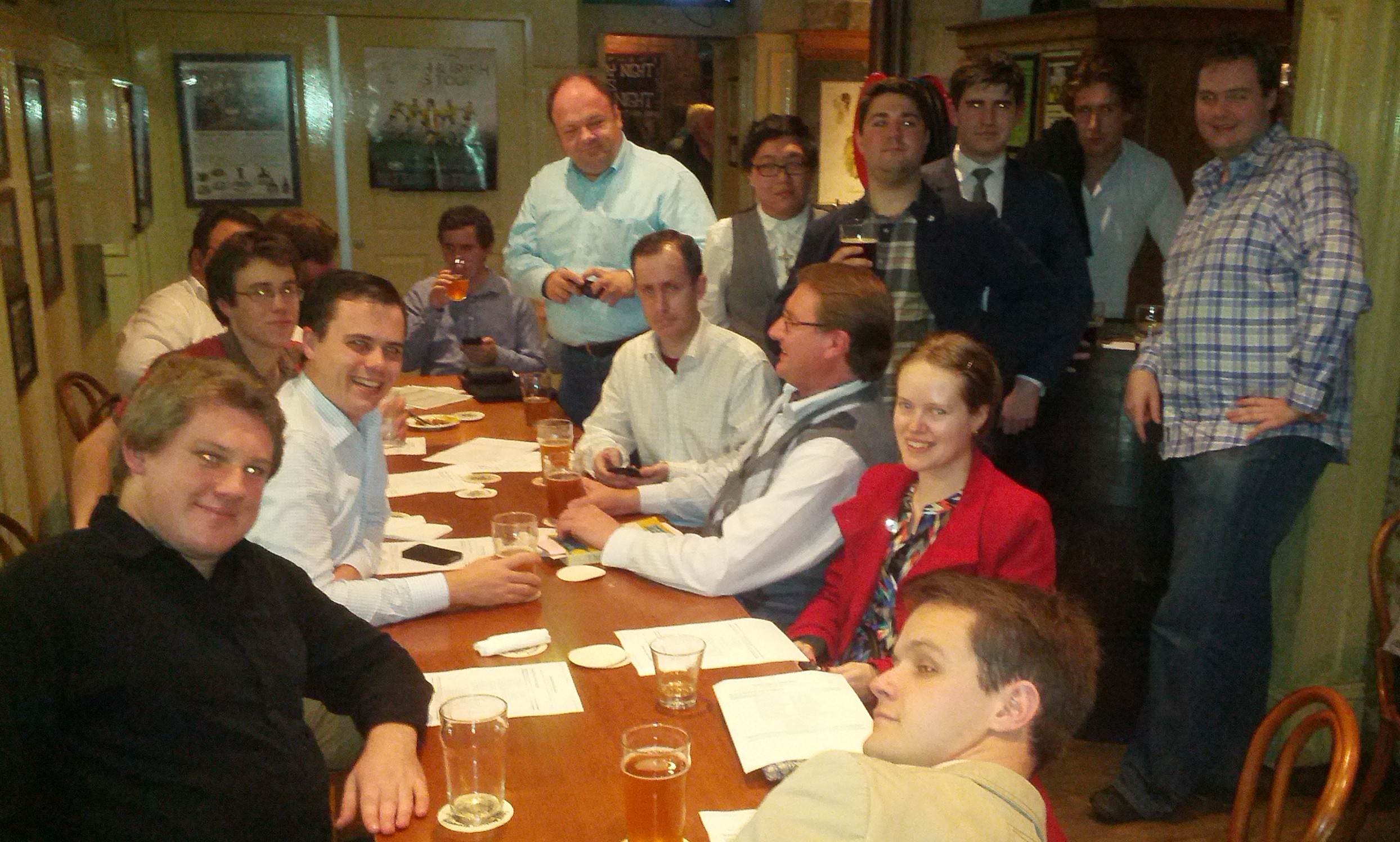 Some of the attendees of the Conservative Cave at the Lord Nelson pub, The Rocks, 31 May 2013.

Members of the Conservative Cave Facebook group met tonight at the Lord Nelson pub, located in an old sandstone building situated in the colonial port district of Sydney: “The Rocks”. This was the third such meeting of the group. Earlier meetings were organised in the art deco Great Southern Hotel (the first meeting was held on 14 September 2012 and the second on 1 March 2013). It was decided that this one would be held in a venue which would reflect our nation’s proud colonial heritage. Tonight we remembered “the fallen”: those who have fought for our liberty and paid the highest price in foreign fields of battle, as well as those who have been victims of the suicidal policies of modern cultural Marxism at home (either through the soft tyranny of political correctness or by suffering the ultimate fate of Lee Rigby, who was in our thoughts tonight). As the night wore on, attendees broke into song: Rule Britannia, an eighteenth century hymn dedicated apparently to English roast beef, and an old battle song conservative students sing on campus to mock middle class leftist radicals at university. The fifth documentary screening of the Sydney Traditionalist Forum was tentatively announced, with details to be forthcoming on the Conservative Cave’s Facebook page.

One of the regular attendees reports:

The meeting was deliberately held at the Lord Nelson Hotel in the historic “Rocks” are of Sydney, as it claims to be Australia’s oldest pub, and had a reputation for preserving many traditions from the motherland. Unfortunately, like so much of the modern world, the establishment has made concessions (but not as many as most) to the new consumerist zeitgeist. The days of dart games, an open fire and singing seemed over, and evidence was mounted upon every wall that the lyrics of the Show of Hands song Roots are true: “Everybody stares at a great big screen / Overpaid Soccer stars, prancing teens”. However, the members of the Conservative Cave were on a mission to resurrect some traditions for the evening and make their presence felt.

In addition to the usual bonding, conversation and exchange of ideas, the Cavers re-asserted a lost tradition of the pub song. Spontaneous bursts of Men of Harlech, Roast Beef of Old England and Rule Britannia all caught management by surprise. So delighted were they with the spontaneity and cultural enrichment, that they lifted their usual “singing prohibition rule” for over two hours as the Cavers enlivened the evening to the delight of many other patrons (several of whom took great interest in the groups aims and purpose). Always the  lady or gentlemen, the Cavers were able to remain until closing time despite being an unmistakable presence to anyone who entered the establishment. The Lord Nelson was truly  steeped in tradition for the evening.

The opportunity to explain the traditionalist message to other members of the public was also an unexpected benefit for the evening. Several Cavers engaged in explanations far and wide of various aspects of traditionalist and reactionary thought: from the virtues of Enoch Powell to the meaning of Conservatism itself.

Be the first to comment on "Third Face-to-Face Meeting of the “Conservative Cave”, Friday 31 May 2013"