Jean Raspail, who is perhaps best know as the author of the prophetic dystopian novel Camp of the Saints, passed away on Saturday 13 June at the age of 94. Throughout his life, Raspail witnessed the demise of his country, as it suffered under the collective imbecility of its political and cultural elites. A Catholic and Royalist man of letters, his warnings were expectantly and depressingly greeted with denunciation and slander. Much like the Englishman Enoch Powell, Raspail attracted a large following of concerned compatriots at home, but also like Powell, he was hated by the those whose heritage he sought to defend from the continuing onslaught of political iconoclasts and cultural vandals, in France and elsewhere. His target was the inversion of virtue, the political anti-order that it produced, and the tyranny it naturally, inadvertently must lead to: 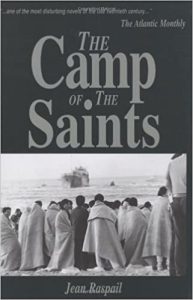 “The journalist’s pen gave him many a size and shape, but one thing never changed: his contempt for tradition, his scorn for Western Man per se, and above all the patriotic Frenchman. Like a kind of anti-Joan of Arc, charged by King Dio with a thousandfold mission. To wit, to crush with the weight of shame and remorse the common, foot slogging soldier of the Western World, lord of its ancient battles, deserted by all his generals to a man, but a powerful force all the same. In column after column, the anti-Joan became, by turns, an Arab workman, snubbed and insulted; a publisher of smut, hauled into court; a black bricklayer, exploited by his boss; a theatre director with a censored play; a young Madonna from some leftist slum; a rioter, beaten for ripping up the streets; a café tough, shot  in his tracks; a student terrorist; a schoolgirl on the pill; the head of a people’s culture centre, summarily fired; a marijuana prophet; a rebel leader dispensing guerrilla justice; a married priest; an adolescent lecher; an incestuous author; a guru of pop; a female dead from an overdose of love; a pummeled Egyptian, a poisoned Greek, a Spaniard gunned down; a reporter, attacked and beaten; a protester crapping on the Unknown Soldier; a hunger striker, soft in the head; a Vietnam deserter; a big chief thug from the wrong side of town; a faggot with a medical excuse; a sadistic schoolboy tormenting his teacher; a rapist, mind twisted by racks of hard-core porn; a kidnapper, sure of his righteous cause; an incurable delinquent, victim of his genes or society’s presures; an abortionist butcher, screaming for his human rights; a Brazilian backwoods wench, sold into São Paulo salons; an Indian dying from a tourist’s measles; a murderer calling for prison reform; a Bishop spouting Marx in his pastoral letters; a car thief, mad for speed; a bank thief, mad for publicity’s easy life; a maidenhead thief, mad for free and easy sex; a Bengali dead of starvation … And so many more. So many crusading heroes, skillfully chosen to please and persuade. Which they usually did. And why not? When the heart gives way, it’s a Turkish bazaar. Freedom is all or nothing. With the likes of this would-be heartrending rabble, these pseudopathetic peons beating his battering rams against the gates, Dio knew that, in time, he was sure to smash them down. When freedom expands to mean freedom of instinct and social destruction, then freedom is dead.”¹

This passage from Camp of the Saints illustrates the anticultural hell-scape which now characterises the West broadly, not just the land formerly known as the Eldest Daughter of the Church, into which Raspail was born and in which soil he has now returned. First published in 1973, the (in)famous volume has been translated and re-released in various editions. Anglophone readers may be familiar with the most recent edition published through the Social Contract Press and which the vDare Foundation has announced a fire-sale of its remaining copies in honour of the Frenchman’s passing.

Men of goodwill and Men of faith should not despair at the death of this courageous author and cultural critic; it is at such times that we should reflect on our role in resistance and restoration; what little we can do to constructively benefit the communities in which we live and into which our families will be raised. It is our obligation not to let Jean Raspail’s legacy go to waste for he reminds us that no anti-Joan of Arc has any moral authority over those who are dedicated to pursuing the Good and True, wherever they may be. Jean Raspail, may his soul rest in eternal peace.