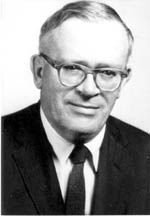 “Hysterical optimism is a sin against knowledge, and the conviction has been here expressed that nothing substantial can be done until we have brought sinners to repentance. Such phrases echo the language of a world thought past reviving, but the statement means simply that those who are in a quandary must be made to see that quandary. Complacency does not look before and after. It has been said with probably truth that the Roman Empire was in decline four hundred years before the situation was generally realized. The Whig theory of history, teaching that the most advanced point in time is the most advanced in development, is total abandonment of discrimination. Once man has regained sufficient humility to confess that ideals have been dishonoured and that his condition is a reproach, one obstruction has been removed.

“We must avoid, however, the temptation of trying to teach virtue directly, a dubious proceeding at any time and one under special handicaps in our age. It is necessary rather to seek out those ‘incalculably subtle powers’ of which Ortega y Gasset speaks. This means that the beginning must not be less hardheaded and sophisticated than dozens of competing doctrines which would lure people into paths of materialism  and pragmatism. Good will alone fails in the same way as does sentiment without the underpinning of metaphysic.

“The first positive step must be a driving afresh of the wedge between the material and the transcendental. This is fundamental: without a dualism we should never find purchase for the pull of upward, and all idealistic designs must be scuttled. I feel that this conclusion is the upshot of all that has here been rehearsed.  That there is a world of ought, that the apparent does not exhaust the real – these are so essential to the very conception of improvement that it should be superfluous to mention them. The opening made by our wedge is simply a denial that whatever is, is right, which takes the form of an insistence upon the rightness of right. Upon this rock of metaphysical right we shall build our house. That the thing is not true and the act not just unless these conform to a conceptual ideal – if we can make this plain again, utilitarianism and pragmatism will have been defeated. For such are the ultimates which determine values, significance, and even definition. Since knowledge finally depends on criteria of truth, we can even restore belief in the educative power of experience – which relativism and scepticism both deny. The prospect of living again in a world of metaphysical certitude – what relief will this not bring to those made seasick by the truth-denying doctrines of the relativists! To bring dualism back into the world and to rebuke the moral impotence fathered by empiricism is then the broad character of our objective.”

▪ Richard Weaver, Ideas Have Consequences (University of Chicago Press, 1948) extract from pages 129 to 131

Be the first to comment on "Quote of the Week: Richard Weaver, “Ideas Have Consequences”"