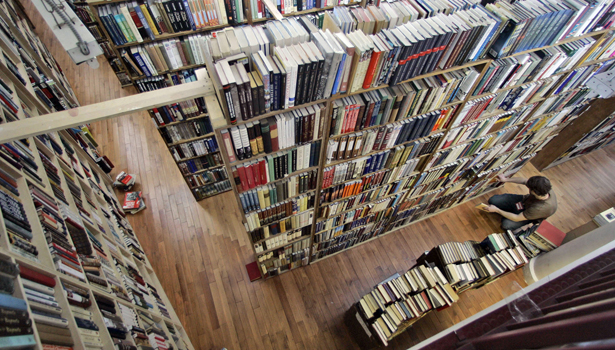 Today I had the misfortune of finding out that yet another independent book seller is on the brink of closure. It seems to me that the more money people make, the less they read. What an alarming correlation. However, as their disposable income rises, so too, the great ‘illiterati’ of Sydney’s wealthy suburbs decide to spend their spare cash on whim, fad and fancy as opposed to ‘the permanent things’.

The problem I face is that it is not just the independence of the book seller that is under threat, it is also mine. As the pool of independent book sellers dries up – those who truly knew their craft, and by their very nature seemed to instinctively preserve what needed preserving – so too does my capacity to engage in free thought by being informed, especially informed of the past.

Instead, as the independent shopping areas become consumed by generic supermarkets and shopping centres, I will be offered a steady diet of whatever sells. Even worse, as today’s consumer becomes increasingly manipulated, I will find myself being told to like things, rather than being trusted with such a judgement. The pages of Ira Levin’s This Perfect Day begin to read more like a diary thrown back from the real future than a work of speculative dystopia.

When Belloc wrote of the state of semi-slavery in his The Great Heresies, I think he had, what we are on the brink of becoming, in mind. We are offered comfort in the place of liberty. My freedom to inform myself, to choose my intake of knowledge, food and taste, to be eccentric, is replaced by an easy to follow guide to a comfortable existence with no meaning. Rather than argue and rebel – wasting all that effort just to get what I want – wouldn’t I rather just accept the beige and vanilla on offer and leave it at that?

The time is coming, I fear, when the quirky and independent areas of life that my city has to offer will be replaced by streamlined and ever so efficient and convenient banality. J.G. Ballard’s Kingdom Come is yet another dystopia that reads more like a horoscope.

Resistance is the only answer for the moment. Whilst we still have the power to vote with our feet, then we should do it. The independent soul who knows and loves what they do should be our retailer – those who have pride in their work and a sense of purpose and genuine interest. Even if it means paying a bit more – or more importantly – being inconvenienced by travel, traffic and parking, then it should be done for the sake of remaining independent. It takes a community to keep an individual independent. The atomistic individualism of some Libertarians or the planned environment of modern liberals is what got us into this mess. What is required is grassroots resistance as a community.

That of course requires a sense of common culture and outlook. That is another story…

The author is a legal practitioner and the host of Carpe Diem, Sydney’s only explicitly Traditionalist and Paleoconservative radio programme broadcasting on 88.9FM, between 8:00 to 10:00pm, Mondays. This article was originally drafted on Thursday, 5 July 2013, as part of the author’s brief series “Aside”.