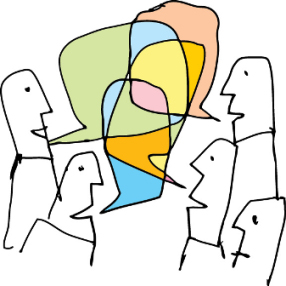 In this world, there are various accents around,
And each speaker emits a particular sound.
Did you know that your accent reveals who you are?
If you’re conscious of that, I am sure you’ll go far.

You may hate it, but it is a fact that your voice,
Will be judged by the others, you have little choice.
Human beings will form, as you open your mouth,
An idea of your origin: north or deep south.

If you ask me, the sweetest of accents are those,
With a melody making a poem of prose.
And I also enjoy hearing purified vowels,
Not the horrible, ugly ones sounding like howls.

If the accent is nasal, it sounds like a whine,
And quite often, if one is not ill, it’s a sign,
Of a person who’s always complaining, annoyed,
Such an accent is suffered, but rarely enjoyed.

If the accent is rough, it can sound like the bark,
Of a dog that competes for its place in the park.
If the vowels are drawn out and unnaturally long,
It may sound like a crow’s loud, cacophonous “song”.

There are accents called “lazy”, no effort is made,
To articulate, or to make sense, I’m afraid.
These are people who mumble and speak much too fast,
And who shorten all words, leaving listeners aghast.

There are accents which sound artificial as well,
Which are used by those people who think they are swell.
But their speech is as cold and as clanging as brass,
They think others are of an inferior class.

What’s the moral in what I have told you above?
It’s so simple: speak clearly, with warmth and with love.
Do respect your companions, yourself and your speech,
So that they will enjoy you and think you’re a peach.

The author teaches the English language to adult migrants and is passionate about all things linguistic. He is also a serious conservative at heart, who treasures the beauty, the poetry and the gallantry of yesteryear. He is happily married with two young children in Sydney. This poem was written after an evening with members of the Sydney Traditionalist Forum and the Tradition Family and Property group in Sydney on 13 May 2014, during which the use and abuse of language was discussed.

My Education in Australia