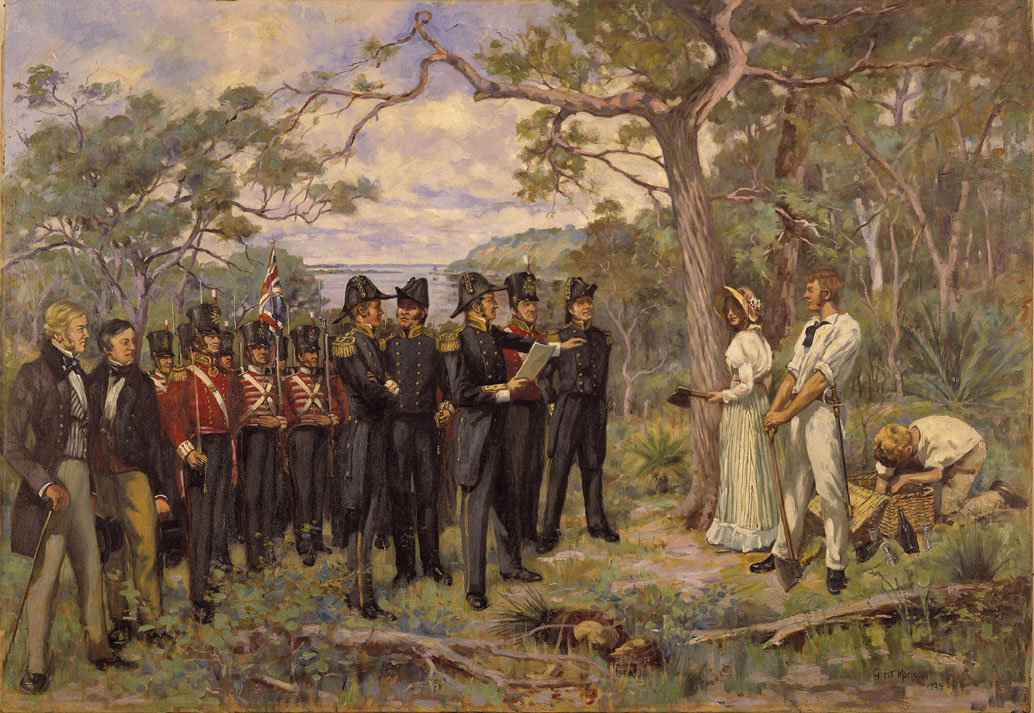 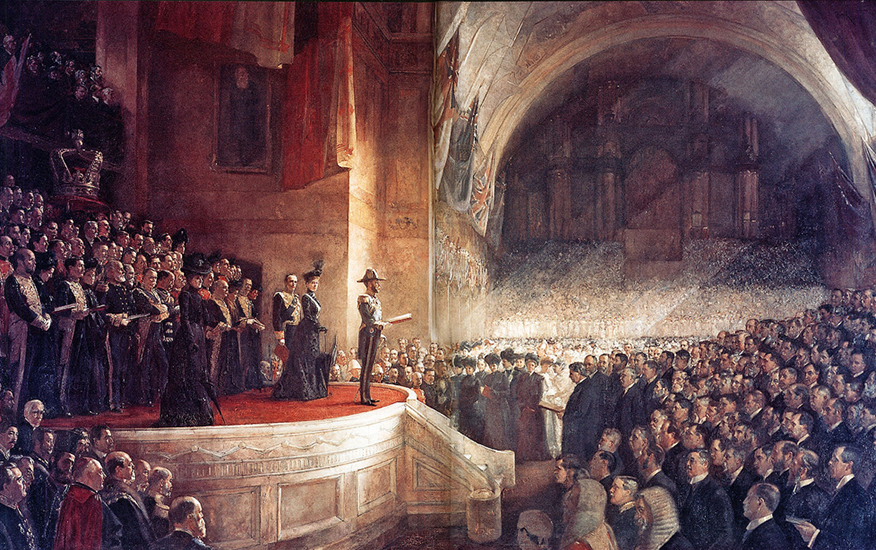 Tom Roberts, “The Opening of the First Parliament of the Commonwealth of Australia by H.R.H. The Duke of Cornwall and York (later H.M. King George V)” (9 May 1903)

Earlier today, we made the point of emphasizing the importance of asserting a robust and unapologetic national identity in the face of external threats, that this was not the path our political and cultural elites were taking, and that the events in France in particular were a dangerous premonition of how things could turn out for Australia unless we wisen up.1

That identity, of course, cannot be based on enlightenment abstracts but concrete experience: the history of a particular people who have created a particular community here in the Antipodes. One way that this sense of identity can be fostered is by promoting an alternative to the “Welcome to Country” which is popular in schools, universities and government departments. The current “Welcome to Country” panders to a cultural Marxist programme by using the Australian Aboriginal cause to undermine the heritage of Australia’s foundational population.

Late last year we reported about the development of an alternative text by Social Technologies Inc.2 The text is called the “Acknowledgment of Nation”, and it seeks to incorporate reference to the significant aspects of the Australian national identity: the settler class and the early explorers of the continent, the flag and the Christian religion we inherited through them, the indigenous inhabitants and their mythology, the Commonwealth, the Crown, and British liberty. We are pleased to introduce to our readers the final text which has been published by Social Technologies and can now be used where appropriate:3

We acknowledge the explorers and pioneers and their descendants who planted the British flag and Christian faith on this continent, creating the Australian nation.

We acknowledge the Aboriginal and Torres Strait Islander peoples who have lived here since the Dreamtime.

And we acknowledge the Federal Commonwealth of Australia, created by the nation under the Crown to guard the liberty of all citizens.

“The ‘Acknowledgment of Country’ (AoC) ceremony purports to recognise Australia’s origins but focuses exclusively on indigenous peoples.  It purports to respect the traditional owners of the land but ignores the nation’s sovereignty.  There is no counterbalancing statement of national origins used in school assemblies or public meetings.  To correct this imbalance, an Acknowledgment of Nation is suggested that supplements recognition of original indigenous habitation with acknowledgment of the origins of the Australian nation and the Federal Commonwealth it created under the crown.

“We all need secure communal identities that position us historically, culturally and geographically.  That is especially true of children and young adults.  The Acknowledgment of Country ritual is meant to affirm that identity and pride for indigenous peoples.  But it ignores the origins of the nation as a whole.  The Aboriginal acknowledgment is justified as a statement of origins.  But national origins consist of much more than indigenous prior habitation.  The AoC needs to be supplemented to become an Acknowledgment of Nation (AoN), one that accurately describes national origins.

“An acknowledgment of the historic nation needs to talk primarily about the people among whom national consciousness first arose in the late nineteenth century.  Who were they and who did they think they were?  The acknowledgment should also state the connection between this national awakening and the establishment of the Commonwealth, formed in 1901 when the self-governing colonies became states within the new Federation.

“National consciousness arose among people of mostly British descent who thought of themselves as such.  At the time there was no Commonwealth but self-governing colonies.  Most thought of Britain as the mother country but also identified with Australia.  This was the most cohesive class of nation, an ethnic group living in its homeland.  It was not the type of ‘nation’ whose only social glue is belief in an ideology or set of values or a constitution.  It was the heavy duty type of bond, the kind needed to undertake great things.  Indeed, this identification inspired and facilitated the constitutional conventions of the 1890s, with the goal of federating the colonies for the purposes of common defence and economy.  The nation created the Commonwealth.”

We commend the Acknowledgment of Nation to our friends and supporters. For more information, readers are encouraged to visit Social Technologies website.