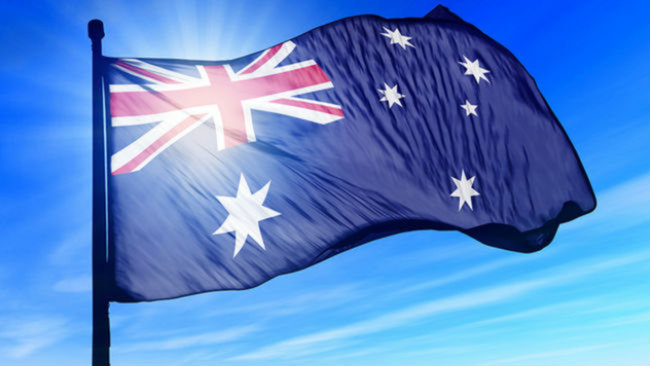 It is no simple task to reflect on our nation this Australia Day, 2015. It seems that many of the items that have dominated the news cycle over the past year have mostly occurred beyond our borders. Yet our country is a distant component of the broader Anglosphere, and an outpost of the Western World bordering the southern flanks of Asia. Developments abroad can therefore offer both a glimpse into our possible future as well as provide an important lessons about the wisdom or foolery of our present course.

Australians often describe ourselves as citizens of a ‘luck country’. There is obviously a great deal of truth to this: we have not engaged in any revolutionary fratricidal wars since our founding in 1788 or federation in 1901; save for the bombings and coastal incursions of the Second World War, we have not had to fight occupation by an invading force. On the whole, we are indeed a luck country, but this luck can far too often be the backdrop to (as well as foster) a negligent apathy or careless complacency. History has taught us that people who live in comfort too long are ultimately reminded that the comfort is paid for in blood.

Unfortunately, Australian cultural and political life shares a current of social pathologies which plague our brother and cousin nations in the New and Old Worlds. This is perhaps only to be expected given Western societies have developed according to a common ethos derives from a Greco-Roman and Christian worldview. In addition, the Anglosphere shares the tradition of individualism, common law, parliamentary representative governance, and of course, a common tongue. This inheritance is one of our most prized assets as a people, however it seems that the metaphysical soil in which the ideas and institutions of British civil society can take root and come to fruition can also give rise to a kind of naive sense of benevolent fairness too readily exploited by hostile interests beyond and without our borders.

As many of us at the Sydney Traditionalist Forum look towards the moral and social chaos of Western Europe and the United States, as well as the suicidal policies and attitudes of its political elite, we fear the repetition of the same here in this the Antipodes of British civilisation.

The Charlie Hebdo affair – the most significant component of which has been the public and political response to the terrorist attack, rather than the attack itself – has attracted particular interest among our friends and supporters in light of the Martin Place Lindt Cafe hostage standoff on 15 December last year in Sydney. The mainstream politically-correct attitude to the crisis in France was best illustrated by the inane cognitive dissonance on display among journalists and reporters. As news of other terror attacks came forth in the wake of the Charlie Hebdo massacre, an ABC correspondent in Paris repeatedly stated that there was “no connection” between them, but there was a “common thread” in that the attackers recently returned from ISIL occupied Syria or Iraq.

The idiotic mental gymnastics were obviously intended to place a break on any thoughts that might lead to questioning the modern egalitarian and universalist dogma. The sacred mantra of ‘diversity is strength’ as well as the doctrines of ‘subscription identity’ must be defended at all cost. Even if that cost means the risk of daylight machine-gunning of civilians in Paris, or the decapitation of an unarmed soldier in the streets of London, the systematic rape of 1400 children under the nose of state wealfare authorities in Rotherham, or the murder of cafe patrons in the central business district of Sydney. In the hopefully unforgettable words of US General George Casey, “as horrific as this tragedy was, if our diversity becomes a casualty, I think that’s worse.” 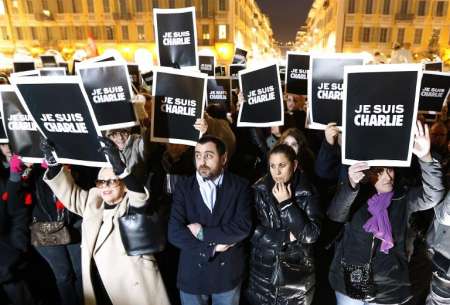 A nation of clowns mourn, drowning in a sea of sentimentalist ethnomasochism.

Casey’s comment was made after the Fort Hood massacre, during which US Major (!) Nidal Malik Hasan murdered 13 and injured 30 other people at Fort Hood military installation. Undoubtedly, this massacre was “unconnected” to, but shared a “common theme” with something – unfortunately our political betters evidently do not have the courage to identify what that something might be. Is it any wonder then, that our own Prime Minister was so hesitant to use the words ‘terrorist’ and ‘Islam’ during and after the Sydney siege, even as the banner of Jihad hung in the window of the Martin Place cafe?

The absurdity of Parisian marchers holding “Je Suis Charlie” banners – protesting in support of ‘freedom of speech’ – was highlighted by the number of individuals arrested by French authorities for hate crimes in the days that followed. The simple lesson is this: you can either have a free society, or a multicultural one. You cannot, cannot have both. We dwell somewhat on the events in Paris because they show us the danger that might awaits Australia if we continue walking down the road of doctrinaire, egalitarian, so-called progressivism, and all that it entails. 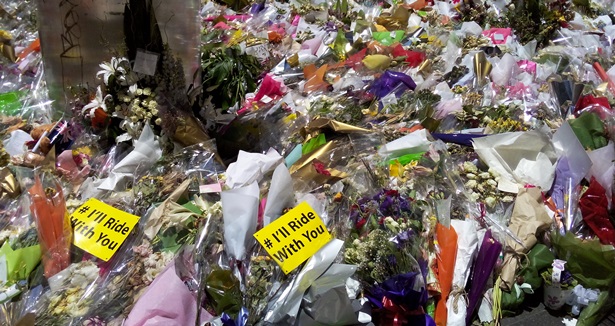 A nation of women mourns, drowning in a sea of flowers, tears and xenophilia.

This Australia Day, as in every Australia Day, we reflect on what makes us a nation. Yet we are barely a couple hundred years old if we discount the history and heritage of our settler class, and ignore it is precisely what our ruling political and cultural elites prefer we do. France can trace its heritage back centuries, yet its doctrine of laïcité, its celebrated multiculturalism and other revolutionary obsessions, all of these mean that the French can only identify as a people with a smutty, offensive, pornographic magazine in such a time of crisis. What will our response be under similar conditions? The “I’ll rid with you” propaganda campaign on twitter answered that question; we are not, after all, all that different from the French in the way our society has become mentally deracinated, neutered by the ideology of cultural Marxism. We have, effectively, lost the ability to appreciate the profound dimensions of our identity.

In his Australia Day address on behalf of the Samual Griffith Society, former High Court Judge I. D. F. Callinan wrote that: “Related matters may return to the active political agenda of the nation. The recent tragic events in France, coming so soon after the tragedy in Martin Place in Sydney, have already brought section 18C of the Racial Discrimination Act back into political contention.” We have covered the section 18C controversy in the past. The corrosive effects of globalisation aside, indeed, we would be foolish to ignore the developments of other countries who are further down the spiral of social degeneracy than are we. We appear to be on the same path as they. France (as well as the UK and parts of America) offers us a view into a dystopic nightmare which no patriot would wish to befall us here in the Commonwealth.

One way, perhaps the only way, through which we can offer active resistance, is to reassert a sense of identity that goes beyond the abstract enlightenment values of ‘free speech’ and the like. We are a particular people with a particular history, and it is this that defines us as a nation and which should be emphasized and promoted at every opportunity. His Hon. Callinan suggests two events in our history which resonate with the Australian soul:

“Australia Day and Anzac Day are in a sense mirrors of each other. The first is a day to honour the fortitude and integrity of Governor Arthur Phillip and his assorted companions who accompanied him from England in establishing the colony at Sydney Cove; and the later intellectual energy and perseverance of the founders of Australia in federating the various colonies to create, without bloodshed, a new nation.

“The second, Anzac Day, honours and commemorates the courage, especially the physical courage, and bloodied endurance, of a magnificent volunteer fighting force.

Man Monis, the terrorist alien enemy of our country and civilisation, was allowed entry into Australia at a time when the Keating Labor government was being replaced by the Howard Coalition government. Hassan Malik was made a Major of the US armed forces by a faceless xenophile military bureaucracy animated by the same multiculti egalitarian mindlessness. The murderers and rapists who target the native British, while the British elite does all it can to pathologise and criminalise nativist reaction, were likewise allowed entry into a country by an electorally opportunist and sinister political elite. It is up to us to remember and imitate the “fortitude and integrity” of our Founding Fathers, and the “courage, especially the physical courage, and bloodied endurance” of those who did not hesitate to serve when their country needed them.

It is those who have sacrificed in building this nation who we remember today. Let us draw inspiration form their strength and we face the challenges of the future.