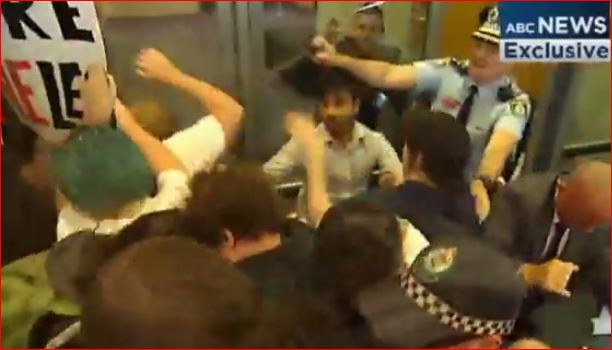 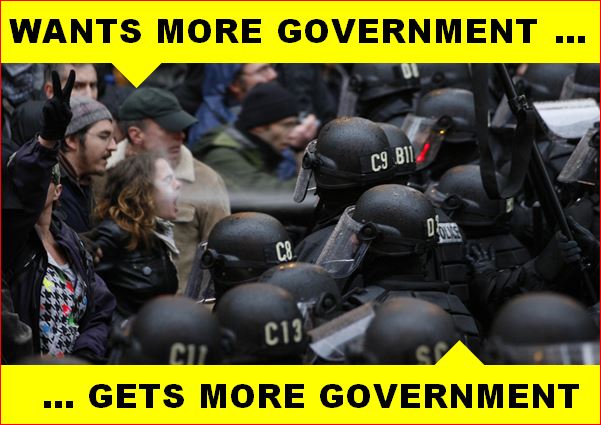 Hard left juveniles from university campuses across Sydney were pepper-sprayed by police today at a “protest” against federal government education reforms that seek to deregulate the university system in Australia. Typical of student “protests” of this type is the incessant and incremental provocation of authorities, culminating in scuffles and inevitably resulting in injury. This, the public is suppose to believe, is a violation of student “rights”.

Although we at the Sydney Traditionalist Forum have been vocal critics of anarcho-tyranny and the growth of the police state, these actions of student leftist radicals are nevertheless indefensible. The irony of course is that these same students will lobby aggressively for an increase of state involvement in all areas of public life. There is no apparent limit to the amount of welfare that will sate their thirst for statist dependency. But as the bureaucracy grows, and as state powers expand into the private sphere of civil society, the doctrine of unintended consequences can make itself felt in the most violent of ways.

The feature image above — which has become emblematic of contemporary progressive radicalism’s tendency to ideological self-immolation — was taken in 2011 at a Portland Oragon May Day “Occupy” rally. “Wants more government … gets more government” has become one of the most recognised catch-phrases among advocates of small government and individual liberty in the United States. It should be used more frequently here in Australia as well. Libertarianism per se is not part of SydneyTrad‘s philosophical worldview, however we do not dispute that where sovereignty is ceded towards state powers, the state can legitimately interfere in what was once the recognized purview of individual liberty. 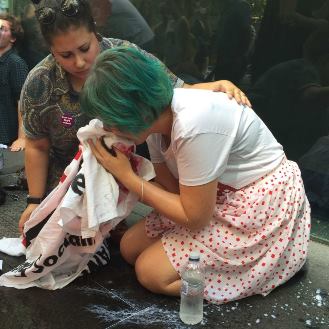 “I take a man and remove reason and accountability…”

Scenes such as those in Oregon have been repeated every time student radicals choose to riot here in Sydney. We are suppose to believe that juveniles acting this way are to be tolerated by the authorities. Only when the authorities react, and are resisted, do the student radicals face the consequences of the environment they themselves have created. Protest against the corporatisation of the education system? By all means! The modernist bastardization of the university is something that traditionalists decry to no lesser degree, though perhaps for slightly different reasons than the acolytes of cultural Marxism who complain about getting mased in the face while taunting the police. One way to fight against the corporatisation of the university system might be to encourage a growth of private sector colleges – but that of course is unthinkable to those who are slavishly wedded to Leviathan.

“Protests” such as these illustrate the inanity of militant, pampered campus babies. Behold the empowered feminist, hear her roar, as she washes pepper-spray off her face with milk: how dare the police not allow itself to be assaulted by this mob of bearded ferals! Behold the impudent middle class social justice warrior speaking truth to power: his levels of ‘white privilege’ not nearly high enough to satisfy these modern disciples of the ever expanding managerial state. Behold them all and weep, for these are the future professional class of the nation. Today, they react with solipsistic self righteous outbursts against their opponents in uniform. Tomorrow, when they likely wear the uniforms, or direct those who do, how will these misnamed “progressives” react to those with whom they disagree? The question answers itself.

Quote of the Week: Justin Raimondo, “Reclaiming the American Right”