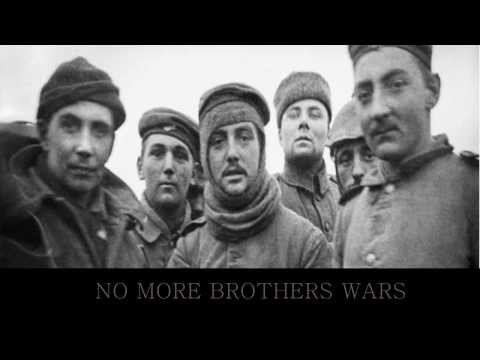 There is an old expression
that ‘charity begins at home’
But so does fighting with your siblings…
“Oi! Leave him alone.”
Mum’s the great peacekeeper
And calls us all indoors
“Now listen here boys,” she says
“No more Brothers’ wars”

We’ve seen it in the Bible
Cain killed Abel first
Jealous of his brother’s blessing
Cain begins to curse.
He pulled a stone up from the field
To sort his brother out
Then God came down
And asked if old Abel was about
“I haven’t seen him Sir,
I’ve been doing chores”
God knew his heart and told him straight –
“No more brothers’ wars”

For us, one hundred years ago today
With bayonets and slouch hats
We joined into the fray.
Most Australians being saplings
Of the larger tree
The branch it reads as Anglo
The Trunk said Germany
For what were kin and clansmen
Were cut-down by the gunner’s roar
And hundreds of their letter’s home read:
“No more brother’s wars”

It’s a lesson for Ukraine’s Kiev
And his brother Moscow
For it always is a pain to see
Two brothers getting hostile
With Crimea being annexed
They argue over laws
All they really need to know is:
No more brothers’ wars

Jesus when he came to earth
Had a thing to say…
“Make peace with God and be his friend,
I take your sins away”
So now we love our brothers
And pray for enemies
Who upon this very day
Would cut our throats
and send us to our knees
But we won’t bow to Allah
We wont heed the call
Our brother is the greatest –
The Son of God what’s more

– Dewi Sant is a pseudonym of a Religion and Visual Arts pedagogue in a prestigious Sydney boys school.