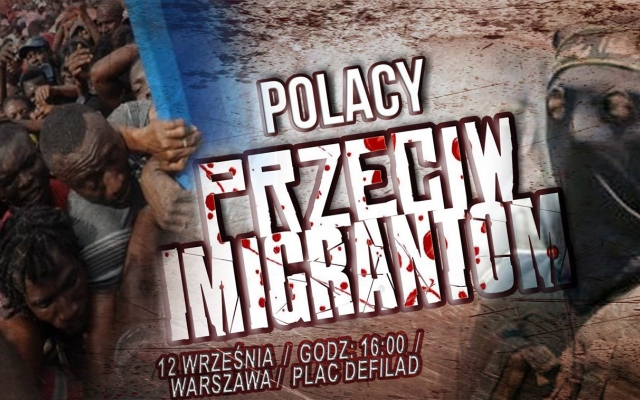 It appears that  the block of Central European nations – Hungary, the Czech Republic, Slovakia and Poland – steadfastly refuses to buckle under the pressure of its Western ‘partners’, particularly their Cultural Marxist ideology emanating from Brussels, which has wreaked the social fabric and cultural vitality of the original founding EU states and which now insists that the East follow in the same suicidal path.

On several occasions now the Visegrad Group of Central European states has rejected the EU’s ‘proposals’ that each and every member state take on a quota of ‘refugees’, while Western European elites continue to promote the political agenda (both foreign and domestic) that has facilitated the crisis in the first place.

A rally protesting against any plans to accommodate ‘refugees’ in Poland is planned in Warsaw today, 12 September at 4pm, and is being organised by patriotic community groups and local grass-roots political movements. The rally is intended to send a clear message to the political class that the indigenous populations of Europe have a right to their homelands and that the abuse of their goodwill by opportunistic and sinister elements will not be tolerated. 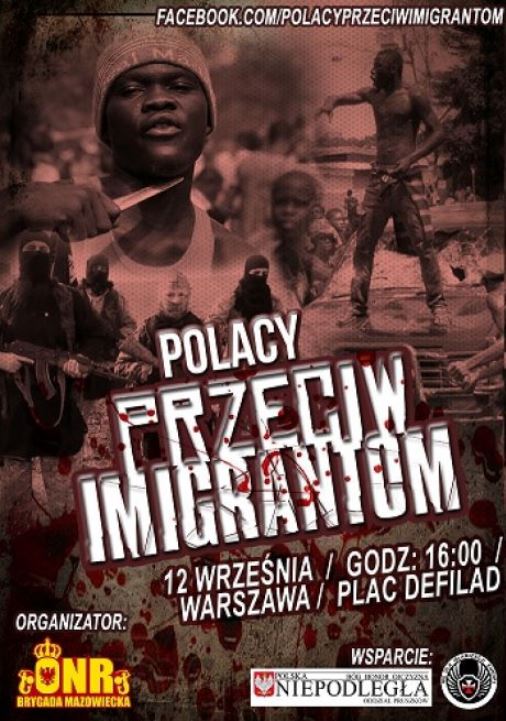 In the past, SydneyTrads has reported on the inherently destructive pathological altruism of Western elites here in Australia. We certainly hope – although we are not holding our breath – that our political class is learning from the lessons of Europe, our civilisational bedrock; we further hope that the response of sober minds here in the Antipodes will mimic the political sanity of the Visegrad Group, rather than those in the West of the continent who are seemingly hell-bent on erasing their national and cultural patrimony.

The Facebook page of the Polish anti-Third World immigration rally “Polacy Przeciw Imigrantom” (linked above) has published some photos of the gathering attendees at the Warsaw city central parade grounds. The following illustrate the various groups involved in the protest and the general cros-section of society represented:

The Facebook page of the rally in Warsaw (protesting against the Islamisation of the West, and the opposition to any further mass immigration of Islamic ‘refugees’ into Poland) has uploaded further images from the Saturday event. The following show the attendees congregating in the Old City Square and marching along the parade grounds. 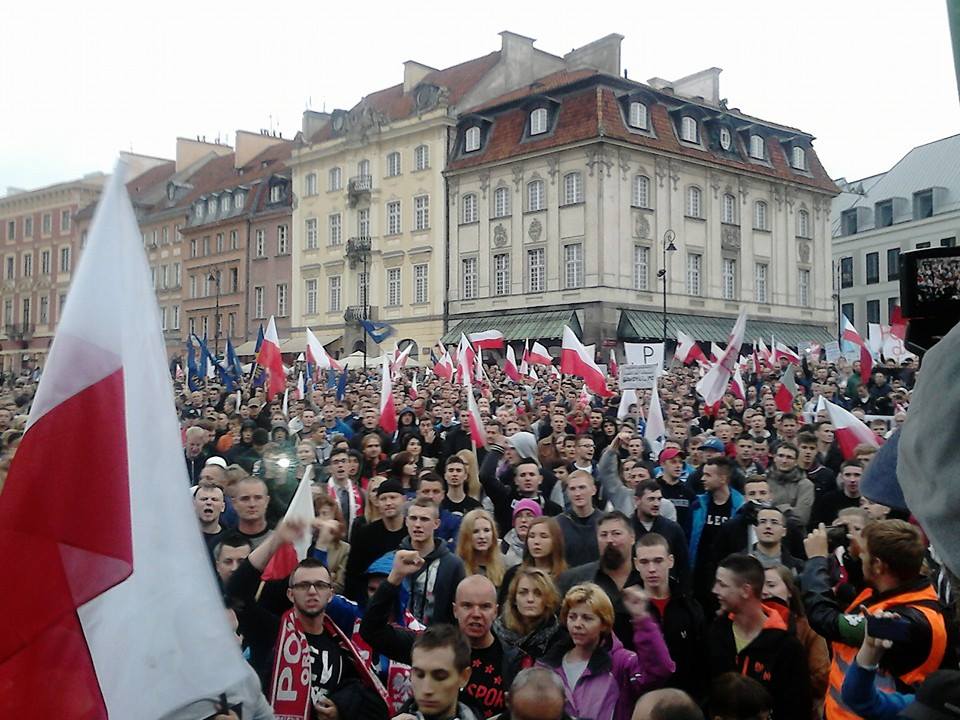 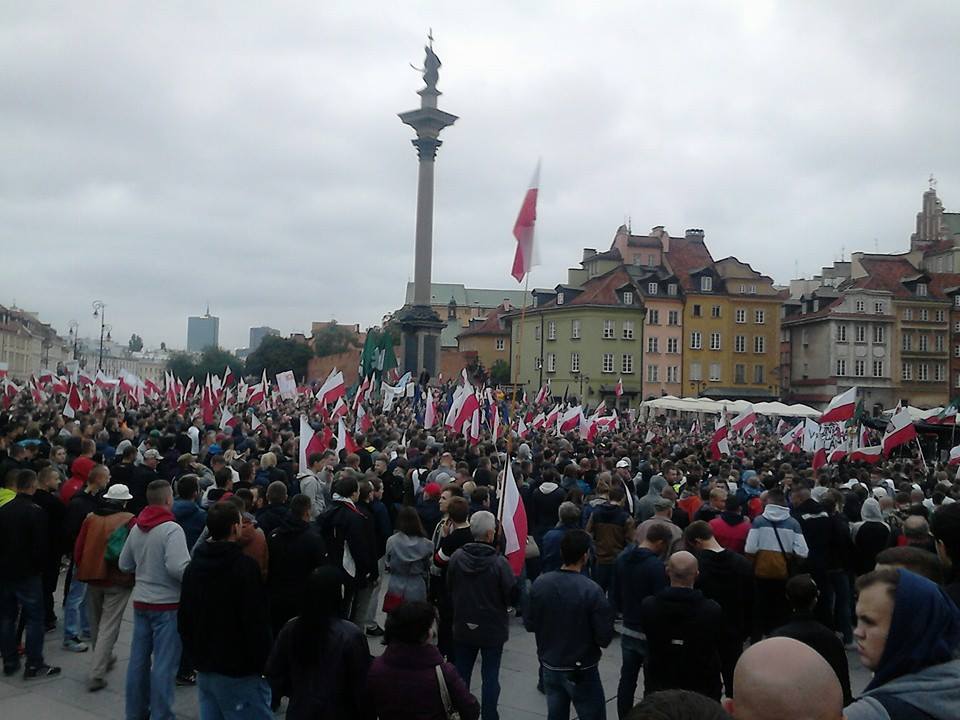 The organizers have also posted a message to supporters and friends, which reads:

“On behalf of ‘Poles Against Further Immigration’ and the Mazowiecki regional chapter of the National Radical Camp, we wish to sincerely thank all those involved. We thank you all for your time and organisation. Without you the manifestation would not have been the overwhelming success that it was. The manifestation was attended by over 30,000 Poles, for whom the good of the Nation and the Fatherland is close to their hearts. Remember that this is merely the beginning of our fight. […] PS: the lying media are trying to falsify the the number of those involved in the march, claiming that only several thousand turned up.”

Indeed, if universals do exist, it is the modus operandi of the globalist and anti-Western left, particularly its predictable template reaction within mass media to any opposition against the suicidal progressive project. Fortunately, however, even one of the last bastions of Catholic Christianity in Europe shows no signs to blindly following the Cultural Marxist sentimentalism of the present Pontiff, who has called on Catholic parishes throughout the continent, Poland included, to take in ‘refugees’ (even those of Muslim, i.e. inherently hostile, anti-Christian religious persuasion) as an expression of ‘solidarity’ and so-called ‘social justice’.¹

According to a recent survey conducted by Ariadna, Poles are overwhelmingly opposed to the concept of offering their homeland for resettlement to mass immigration from the Middle East and North Africa: asked whether Poland should take in the recent flood of ‘refugees’, 65% of respondents answered “No”; when those respondents were broken down into groups along party voting lines, of the conservative Law and Justice Party (Prawo i Sprawiedliwość) 68% answered “No”, of the neoliberal globalist Civic Platform (Platforma Obywatelska) 66% answered “No”, and of the “undecided” group 71% answered “No”; interestingly, when asked whether Poland should take in refugees from Ukraine as a result of Russia’s continued aggression on its eastern borderland, 51% answered “Yes”.² The contrast illustrates a strong identitarian sentiment among respondents.

A march under the banner “No to Immigrants” also took place in Gdańsk, and during which attendees made their way to the statue of Jan Sobieski III, the Polish King who lead the counter-offensive against the forces of the Ottoman Empire at the gates of Vienna in 1683. Auspiciously, the day the marches were organised coincided with the 332nd anniversary of that battle which saw the defeat of Islamic forces poised to overrun Europe in the seventeenth century. The Gdańsk rally featured the Euro-parliamentarian Michał Marusik of the Congress of the New Right (Kongress Nowej Prawicy) who stated that “this is where the heart of Poland beats” and that “let us keep this spirit alive.”³ In response, the crowd chanted anti-EU slogans and expressed solidarity with the Hungarian people: “Budapest-Warsaw, common interests”, “Young! Sovereign! Radical!” 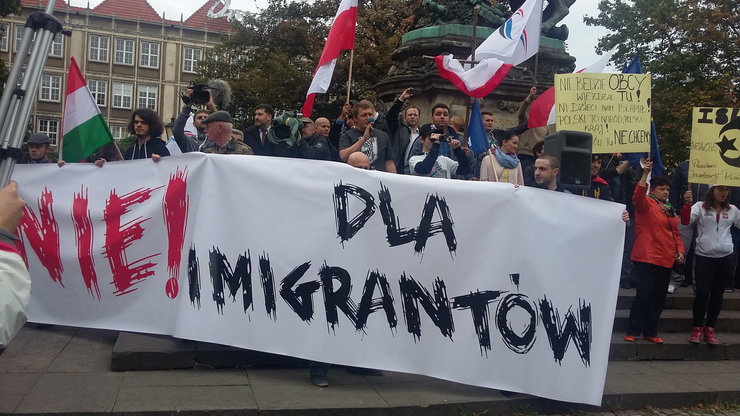 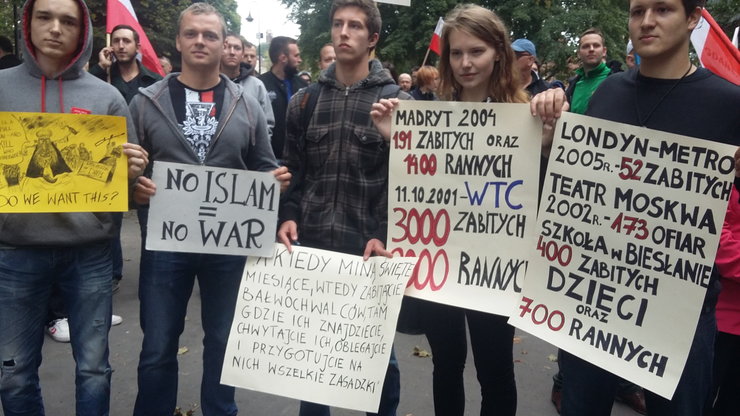