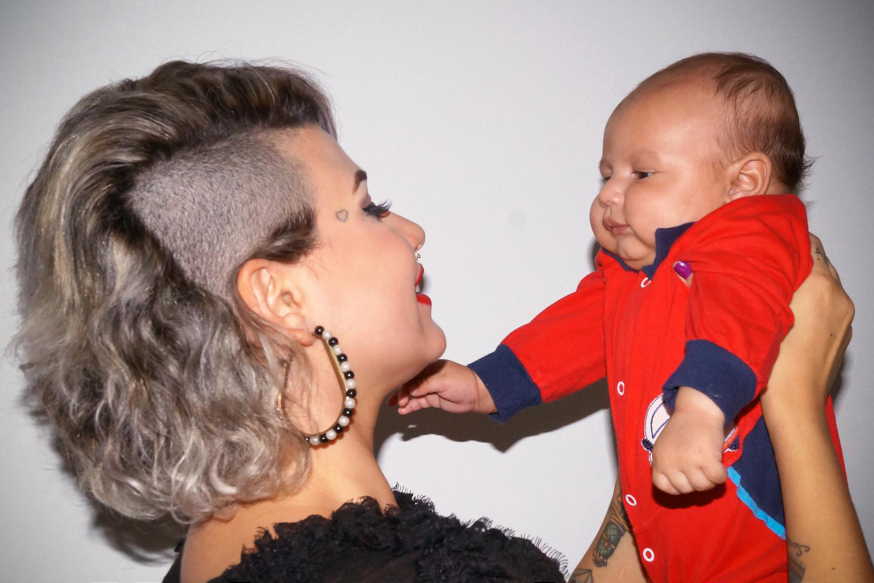 The founder of Brazil’s ‘chapter’ of the international pornographic protest movement Femen has renounced feminism, embraced pro-life politics, apologised to Christians and expressed a desire to reenter communion with the Catholic Church. Sara Fernanda Giromin, who writes under the pseudonym Sara Winter has undergone her religious (and indeed ideological) conversion after recently giving birth. In a message on her FaceBook page, she wrote:

“That was one of the reasons that led me to abandon feminism.
“Hysterical women inciting hatred and violence against men day and night. When I realized that I had turned into one of them I felt fear and shame. I was carrying a male in my belly and I could not hate him.
“A move that makes women slaves of an ideology, it sure is not a good and peace movement. It certainly was not what I was after.
“I love my husband, I love my son, I am happy and free as ever was in feminism.”¹

In an interview with John Burger for Aleteia, the former feminist described how she first contacted Inna Shevchenko, the founder of Femen in Ukraine. While the topless protest movement gave her the impression of strength and courage, “when we met it was different: normal girls, nothing special, mean girls, who call other girls ugly and fat.” The seeds of disillusion appear to have been sown in the early days of her involvement. Not only were the financial resources of the organisation kept secret from members, but those members were “forced into this leftist ideology: you need to be lesbian or bisexual because if you are straight, no one will pay attention to your problems.” As reported in Aleteia:

And what were these cult like qualities? Giromin/Winter explains in another interview with Mark Tapson of Truth Revolt:

“Lesbian and bisexual women have much more voice and respect within the movement, so in the search for recognition of my struggle, with each day that passed, I deconstructed my heterosexuality and was substituting it with an artificial bisexuality.
[…]
“For the feminist sect women are not the inspiration, they are prime matter in the worst sense of the term. They are convenient objects useful for the purpose of inflaming hatred against the Christian religion, hatred against men, hatred against the beauty of women, hatred against the equilibrium of families. That’s what feminism is, and I can guarantee it is like that because I was on the inside!
“I saw the feminist movement cover up for pedophiles. […] I am a witness to the fact that today in the feminist movement women are not of any importance but serve as fuel for the fires of hatred that the feminist sect cannot allow to die.”³

The former radical feminist has written a book recalling her time in Femen and detailing how and why she left the psychologically corrosive and emotionally destructive group. A portion of the proceeds from the sale of Vadia, Não! will go to the pro-choice charity Casa de Amparo Pró Vida São Frei Galvão. Giromin/Winter has now committed herself to campaigning against gender ideology which is being aggressively pushed in Brazilian schools. This development means, of course, that we can expect to not hear about her from the mainstream press in 2016, and onward. In light of the growing influence of decentralised media, that, however, does not matter.

In our yearly review of 2015 we suggested that the past year saw the acceleration of radical liberalism as well as the consolidation of reaction to its internal inconsistencies, as well as the absurdities it leads to; 2015 was the year of the quickening.4 Sara Winters’ reversion to normalcy is but another example of how no amount of social engineering, utopic state policies, and abstract theorising will erase individuals’ innate natural qualities, desires and yearnings. Even this leading agitator against normative morality could not eradicate the latent forces of motherhood in her heart and mind.

What Sara Winters has experienced is merely a return to her essence, and that, in the context of contemporary Cultural Marxism’s war on human nature, is possibly the most liberating move she could have committed. Notably, its political character is merely incidental because the traditionalist disposition is merely the reflection of a life ordered according to natural (and therefore moral) hierarchies. She has repudiated the Revolution, and by doing so, has returned to her rightful place within the ordered cosmos of Family.

Quote of the Week: Eric Voegelin, “The Political Religions”

Quote of the Week: Theodore Dalrymple, “In Praise of Prejudice”