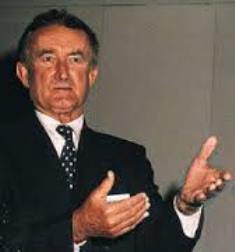 “Do not suppose, that in thus appealing to the ancients, I am throwing back the world two thousand years, and fettering Philosophy with the reasonings of paganism.”
– Bl. John Henry Cardinal Newman

“Their zeal may be our sin. Lord let us run
Mean ways, and call them stars, but not the sun.”
– John Donne1

I suppose that many people can have fond memories of a headmaster and hence mourn their passing, especially in a nostalgic sense. For me it is far different. Rod was a friend – pure and simple. Once you were his student, you received his pastoral care and tuition for life.

Rod was a rare breed – as if he had been lifted from a warm-hearted Victorian novel. He wasn’t a cliched “Mr Chips”, no, not that. He had a zest and enthusiasm about him that enhanced modernity – he was no ‘relic’. He knew every boy’s name at the school – well over 1,000 at any one time – and each received a ‘Caramello Koala’ on his birthday. He made sure he squeezed some class time into his seven day week. Rod was no mere administrator or “business manager”. He had taught me both Latin and Donne as a young man, and had even managed to give a few sermons during chapel (including one of the finest exegeses of the Pater Noster I have ever heard.)

As an adult I came to appreciate him more and more. As I had children of my own I came to realise what an genius of education it had been my privilege to experience. The older Rod still kept his black locks – as if a raven sat upon his head warding off death. Many off us just assumed from his vivacious attitude that he had a good decade or more left in him, even though he had now reached his mid-eighties. He swam at Manly beach each morning, had a tan as bronzed as the ancient Greek shields his historical intellect admired, and was one of the great cosmopolitan raconteurs. I suspect he was more well-known along The Steyne than Tony Abbott.

He believed in his GOD, adored his church, devoted his mind to the Classics, waxed lyrical about the Greek Islands, loved to read, loved to know people – and was driven by an unstoppable mission of compassion to always help them. He was committed to his wife Janet, a reserved but equally kindly lady of immensely powerful intellect – she was the “firmness” that made his “circle just”. I wonder now, how she will fill such a cavernous void, but I am re-assured by the fact that their’s was “a love so much refined”.2

My last meeting with Rod was at a cafe in Manly by the sea. A couple of Trinity Grammar Old Boys, my three children and me. Upon arrival I was immediately swamped by the tsunami that was Rod’s effervescent personality. He had the table’s conversation well in hand. The permanent twinkle in his eye seemed to enlarge, crystalline, upon my arrival. My young children all caught the awe of this vivacious, grandfatherly man. Immediately the morning had been declared “special”.

Before sitting down, I went to the bathroom, and sure enough, I could hear Rod’s voice like a melodious cracking whip: “What have you got there?” he enquired of my eldest boy, who, like his father, always seems to carry a book with him; “Greek Myths!” exclaimed Rod approvingly – my credentials as a parent were now assured.

What a childhood education I took for granted! Rod West was the Cardinal Newman of Sydney so far as his views on education were concerned. When he educated boys, he was no utilitarian. The state forced his hand in relation to curriculum, and there were certain economic realities he had to face. I presume he was also beholden unto the school council to an extent (Rod was always too polite to engage in such political gossip) – but within these constraints I became exposed to the pillars of Western Civilisation in ways I now never see.

How many schools can lay claim to a replica Ancient Greek theatre as a playground feature? A school where the aesthetic of the grounds matters, because the headmaster wasn’t just educating your mind he was nurturing your soul. He understood that this meant more than just tending to the Anglican faith that underwrote the school and its ethos, it also meant stimulating the moral imagination of the boys and engendering community between them. Indeed we were a kind of Polis. The school’s motto was “Detur Gloria Soli Deo” – may glory be given to GOD alone. I don’t notice the same as I drive past the school these days (it has been replaced with a slogan of a very pedestrian nature on the main public notice board), but of course, Rod would always be too polite to comment upon that.

He was a first rate orator (yes, I’m saying so Rod3), and had a remarkable way of instructing us in our moral education via elaborate stories and parables – highly effective for adolescent minds. One of my favourites was presented at a camp designed to prepare us for the senior years. He told us the tale of early Christian missionaries to New Guinea, who had spared the population from the long standing illness of Kuru, derived from their practice of cannibalism. The curse was lifted once they embraced the teaching of the church and ceased their morbid dining habits. Rod quickly turned this into an allegory about sex. Rod’s simple message was that abstinence was the best contraceptive of all – and drew amusing analogies to missionaries instructing natives as to practices of “safe cannibalism”. That was classic Rod – the living Victorian comfortingly received. Political Correctness be damned – he believed in manners and courtesy. I imagine him in good company with Lord Kenneth Clark describing himself as a “stick in the mud”.4

I couldn’t describe Rod as a “Conservative” in the sense that I am. He was more a conservative in the sense of W.E.H. Lecky or Macaulay. I think he believed that the virtues of British Nineteenth Century Liberalism still had a chance to exist in the modern world. I did however note a sympathetic ear to my Paleoconservative leanings, and underneath it all, I think he carried with him a deep sense of regret as to where ‘it’ was all going – the ‘it’ being the civilisation that he nurtured and loved in his cosmopolitan way.

I remember that we never used to sing “Advance Australia Fair” as the National Anthem at school. We sang “GOD Save the Queen” instead (this is during the 1980s mind you). Rod would explain that if we were to profess ourselves as a Christian country (which he certainly did, even if the Prime Minister of the time didn’t), then our National Anthem had to make reference to The Almighty. So, Advance Australia Fair became for us merely the national song. There was something irremovably English about Rod in spite of his Hellenism, love of the world and its people, insatiable curiosity about other lands and cultures and his propensity to immerse himself in other worlds. I didn’t quite understand it as a boy – but I do now.

Rod instinctively understood the value of Tradition and the Moral Imagination. He hoped to pass the torch on to us – and he certainly has. While many merely succumb to the commercial lures of modernity, some of us were reached.

I can’t say that I hope to see you soon – but I know this much, where you are now is where I aspire to be worthy enough to be.

The author is a retired legal practitioner and now an academic researcher and host of Carpe Diem, Sydney’s only explicitly Traditionalist and Paleoconservative radio programme broadcasting on 88.9FM, between 8:00 to 10:00pm, Mondays.

Endnotes (by the Editors):