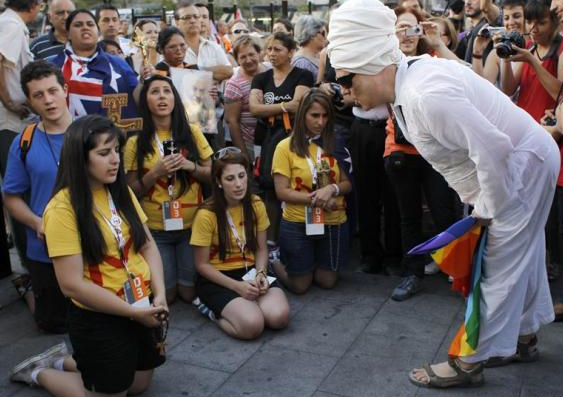 Every Sabbath, Christians in the Middle East face the too-real possibility of martyrdom. As they wash their face in the morning, they catch themselves in the mirror and ask, am I prepared to die for Christ today? If not, they stay home. Most go anyway.

Thank God the situation isn’t so dire in the West. But as we continue to descend into militant secularism, that may be coming to an end. The Remnant carried a harrowing report last week about a Brazilian priest, Father Anderson Batista da Silva, who was charged with assault for defending the Eucharist from a would-be defiler. “The [Latin] Mass had already begun when a man in his sixties entered the church and, from the outset, started to complain, out loud, about several issues (the rite, its duration, the Gregorian chant, etc.), thus, bothering those around him,” the report says.1

​At Communion, the man demanded to receive the Sacrament in the hand rather than on the tongue, which is customary in the Extraordinary Form. Father Batista eventually relented, but the man didn’t consume the Host. Instead, he walked away with the sacred matter still in his hands, saying “the Host did not belong to the priest and that he had the right to make his Communion wherever he wanted” – and, further, “that this was not his religion and that this old Mass did not exist.” Nearby parishioners informed the man that he would not be allowed to leave with the consecrated Host, which can be desecrated – a very real concern in this depraved age.2 A brief altercation broke out as the parishioners tried to retrieve the Sacrament, which resulted in it being crushed and scattered on the floor… and Father Batista being charged with assault.

Now, there was a time when this would’ve been unthinkable, especially in a Catholic nation like Brazil. While defiling the Eucharist may not be against the law, the use of moderate force in its defense wouldn’t have been, either. No police officer or magistrate in their right mind would say a priest should be prosecuted for protecting the incarnate person of his God… at least as he sees it. Granted, it’s all a bit nebulous, legally-speaking. But that, too, has its virtue. In a healthy society, there isn’t a law regulating (or de-regulating) absolutely every facet of our lives. Some things are simply too great to fall under man’s measly authority.

Not so, it appears. And the Church in Australia is also facing persecution if she remains faithful to her practices, only here in regard to Reconciliation. In the wake of the clerical sex abuse investigations – which every faithful Catholic must find truly horrifying – there are calls for Australia to cease respecting the Seal of the Confessional.3 Julia Gillard is among them. “It’s not good enough for people to engage in sin of omission and not act when a child is at risk,” said in 2012, at the beginning of the Royal Commission. One victim referred to it a “get-out-of-jail-free card” for paedophile priests,4 which of course it isn’t. The Seal of the Confessional doesn’t absolve abusers of legal – or even necessarily moral – culpability. It merely prevents authorities from prosecuting innocent priests who hear these abusers’ confessions and can’t report them, for love of God’s sacraments and fear for their immortal soul.

“In a society that supposedly upholds freedom of religion, the notion of the state compelling any Catholic priest to break the seal of confession over any penitent’s sin, including clerical child sex abuse, would be intolerable. It would smack of the mindset behind the religious repressions of the Soviet Union, the Chinese communists and Henry VIII and Elizabeth I as they drove the Catholic faith underground.”5

Which isn’t exactly true. Let’s face it: as far as the law is concerned, there’s no good reason why confessors should be exempt from charges of ‘concealing serious indictable offence’. We should be clear that what we’re asking for isn’t equality, it’s a legal privilege.

But it’s not a privilege for Catholics or confessors. It’s certainly not a privilege for pedophiles. No: it’s a privilege for God and His Church. We’re asking that the authorities of this earth humble themselves and then take stock of their authority, which may be great, but is by no means absolute. The powers that be are ordained of God, Scripture tells us; yet God gives none of them power to modify the sacraments. Not Henry VIII, not Xi Jinping, and not Julia Gillard.

This might just be so much spitting into the wind. Pleas for our political class to respect the sacraments may be slightly less effective than a ‘Keep Off the Grass’ sign in a cow pasture. If so, what a small, sad world this is become. Man is a fundamentally spiritual being; if the law refuses to acknowledge that fact, it’s already – quite literally – inhumane. All that’s left to do is round up those 99.9% of confessors who refuse to break the seal and throw them in jail for complicity. Hopefully Father Batista gets his too, no? What a proud moment that will be for Ms. Gillard, when the City of Man at last occupies the City of God, strikes its banners and exiles its Prince.

– Michael Warren Davis is a native Bostonian who has contributed essays to the Sydney Traditionalist Forum. He tweets at @KermitLaphroaig