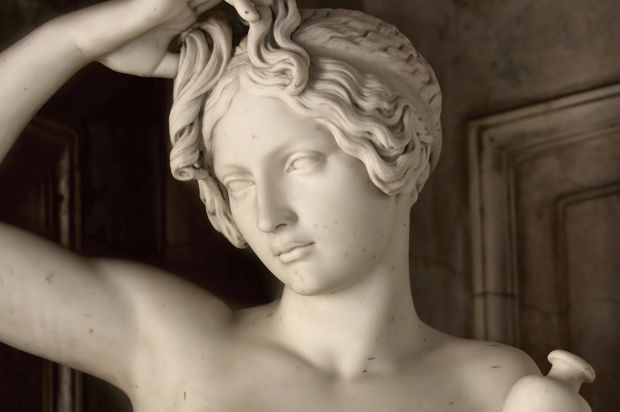 And dip and dance upon forgetful sighs

Of southern breaths which bear those she supplied,

Who bade the cithara, and lute, and tambourine

To nurse her sickened heart across the sea,

For borne it was from her, whilst she behind!

As learnt of wing in Araby—

And break your kin Etruscans free!

Remember not those sad and pagan days—

But vent upon the dreadful Winter throne—

Unrein, thou South, and have revenge on Rome!

Where thick the clouds of incense ‘neath a blaze

So bring, ye Spring-winds, us re-birth

And soothe away Demeter’s curse!

“The Bride,” then sing, “her bower left—

So tress her marriage-bed, thou Earth,”

Thus be, for only grieveth Death.

Nay—but another bride, of whom sing loth

Not, weave her epithalamia, stay,

And hymn the God of Fairness for this Maid!

Doth prove Him true she come to plight her troth.

Who weeps as maids are wont on wedding days—

And dawns an end of nights where lonely lay

She ‘neath her dreams and hopes and cottar’s cross.

(Why be then still, ye charms of Spring?)

The cross, above what girlish frights

And steady through her fearful sights

She prayed an end to lonely nights.

O God, be patient Thou if I contend:

For my weak heart is lost and I am dazed

By her, though fawn-like, tremble I to gaze—

For what a thing is she in realms of men,

(And what unlikely gifts are we to them!)

Where phantom dreams of head-sick rage

All this world wreck, the silly stage

Of wretched men!—and shall we thus be friends?

Of paradises ‘neath the sun,

(Nor fear, for Frederick keeps his cave)

In Eden’s eve, when we were young.

The Sun unbolts his canopy, thy Man is come—

Nor vaunted knight nor merchantman of wealth,

A boy obscure, unpartisan, not Guelph

Nor Ghibelline, but son of simple son—

For what thou seest is, and nothing else,

And what he is thou hast all to thyself,

O Bride, thou freshness of the day,

All Nature sayeth: “Be thou gay,

Belov’d, but Spring’s not ever fresh,

For emp’rors are but stalking shades

And common children are but breath.”

— Carl Hildebrand  is a Latin Old Calendarist (i.e., traditional Catholic) writing from the American Midwest. His poetry has also been published in Social Matter. Under another name he writes academic religious history.