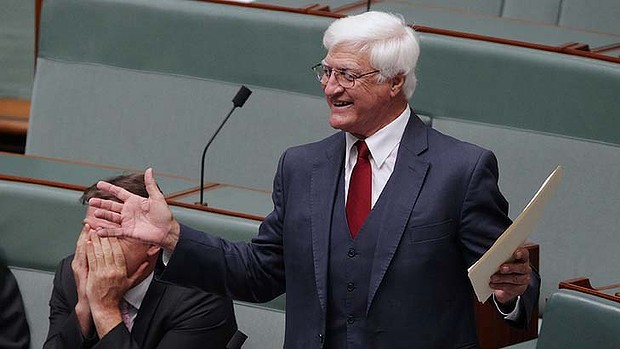 Reports of the counter-intuitive endorsement of a cultural Marxist candidate for ‘Katter’s Australian Party’ in the Australian Capital Territory’s upcoming elections, has cast a dark shadow over the prospects of a genuinely conservative third force evolving within the nation’s political mainstream.

Although the Sydney Traditionalist Forum was established as an association of independent-rightists, and therefore eschews affiliation with any established party or faction, we have nevertheless welcomed any new conservative force that may disturb the stagnant two-party liberal equilibrium.

Katter’s robust machismo, unapologetic rural identity and rejection of urban elite patrophobia, his committed nationalism in the face of the neo-liberal globalist policies of both Labor and the Coalition, his ability to stand alone against broad alliances of corporate and political interest groups, and his almost caricaturised nativist public profile have all earned him respect among disenfranchised electors across the political spectrum: the old left blue collar labourers and white collar paleoconservative middle class alike.

On 22 June 2012, some of our members attended the Sydney launch of his book: An Incredible Race of People.1 We had hoped that the entry of the Australian Party would induce the ‘establicons’ to rediscover their neglected bedrock of old world principles, arrest their continual accommodation to leftist paradigms, and reinvigorate their base. Katter’s public backing of a candidate who is diametrically opposed to one of his party’s main policy platforms, illustrates that our enthusiasm for this new electoral group was sorely premature.

The Sydney Traditionalist Forum was initially formed by a group of paleoconservatives who became thoroughly disillusioned with the opportunism of the so called ‘mainstream’ establishment right-of-centre parties, and the endemic cowardice of their leaders and representatives. Needless to say, the reasons for the incessant drift towards leftist policy among elected politicians of the nominal or titular right are complex. We believe these can be attributed not just to the essentially liberal paradigms that faux-conservatives themselves ultimately adhere to, but to two other reinforcing environmental factors as well:

The first is that the media, overwhelmingly dominated as it is with a culture of ‘progressivism’, which mediates between the Parliamentary representative and the electorate. Aspirants to political office therefore have to primarily address what has become an incestuous class of liberal journalist activists. Candidates for office must now seek this de facto lobby group’s approval and endorsement before they can become electorally viable. Electoral viability becomes a function of how the media receives the political messages presented to it by the political aspirant. This of course divorces the politician from the electorate he is suppose to ‘represent’, and the impact on right of centre politics is profoundly affected. The second factor is the reluctance of soi disant ‘mainstream’ conservatives to understand or acknowledge that they are indeed engaged is a war of ideas and worldviews against determined opponents who will not accept compromise as a solution to political gridlock.

We turn our thoughts to this somewhat depressing state of affairs as we learn that ‘Katter’s Australian Party’ has endorsed a candidate for the Territorial Senate who supports the legislation of so-called homosexual ‘marriage’. Has Katter fallen victim to the same media-political machinations as all those other establishment personalities he likes to distinguish himself against? It certainly appears so. Canberra’s Capital Radio Network reports:

Unlike some other Katter candidates, Mr Bailey says he supports same sex marriage [sic]. And if he makes it in to the Senate, he’ll be working to change the party’s anti-gay marriage [sic] policy.

“There are battles to be fought everywhere in life,” he said.

“Personally I haven’t heard an argument as to why we should stand in the way of something that may be inevitable. But our party is diverse and strong and robust enough for it to have people like me to argue that case.”

Bob Katter has welcomed the diverse views, saying he wants his party to welcome all sorts of candidates.2

There are indeed “battles to be fought everywhere in life”, but surrendering to the opposition is hardly a convincing way of fighting them, Mr. Bailey. And why is the cultural vandalism of the liberal establishment always couched in terms of inevitability? One never hears of conservative reform as “inevitable”; not even from the mouths of our staunchest right-of-centre political figures. Why is that? Nothing is ever inevitable with effective and principled opposition. Katter’s elevation of “diversity” over principle, his endorsement of this philosophically hostile candidate will likely result in chaos within party and its supporters. Thus any effective principled opposition there has been effectively terminated.

As for young candidates, Mr. Katter, not all of us are agents of the Sexual Revolution, hard as it may be to believe. Why is it that young traditionalists are rewarded with marginalisation within the ranks of mainstream parties, as has been the case for many of our members? Why is it that we then encounter this clueless “diversity” nonsense from the leaders of the pretend-right, allegedly with a view to get the elusive ‘conservative youth vote’? If it’s young people you want to stand for Parliament, are we really that invisible? Or is it that the establicons are embarrassed at a blunt and honest articulation of conservative thought, which apparently only we can offer? Or is it that our learned elders subconsciously acknowledging that the Culture War has been lost many decades ago due to their own lack of courage in prosecuting their case to date?

Whatever the answer may be, moral cowardice is not the solution to the crisis of modern liberal democracy. There is a reason why increasing sections of the electorate are losing faith in the political process, and mimicking the progressive behemoth on civilisation defining issues does not enrich the democratic system, it impoverishes it. If a personality like Bob Katter does not understand this, if instead he willingly capitulates to the liberal agenda on this policy issue, then our view that the political process is decayed to the core is confirmed in spades.3

If the testimony of suspended Katter’s Australia Party member is to be believed, the fallout has already begun. On a statement published on his personal website, Bernard Gaynor writes that:

[…] the announcement marks the capitulation of Mr Katter’s tortuous opposition to gay marriage [sic] and may well destroy his party.

“What Bob doesn’t appreciate is that the members signed up to his party because he stood for something. That was economic and social family values – including his party’s firm stance that marriage was between a man and a woman.”

“His decision violates the core values of the party he founded and has already begun causing huge ructions. I’ve been informed numerous resignations have already occurred today over the party’s new direction.”

“It’s ironic that I have been suspended from the party for supporting its core principles but an endorsed senate candidate is attacking those principles with the protection of Bob Katter.”

“It will be interesting to see how the Management Committee meeting next week deals with my suspension without tainting every member on it in the stench of hypocrisy.”

“One thing I know for sure, is that Bob Katter is sick of being questioned about gay marriage. His latest decision is unlikely to end the questioning any time soon.”

“Considering I sat next to him when he approved the party’s Queensland election campaign advertising, my advice is that he should relax, take a deep breath, and be honest for once about where he stands.”4

We are not oblivious to the fact that politicians seeking office must win votes to obtain a position of influence in Parliament, that this requires the ability to compromise and the capacity for occasional ‘deal making’ with the foe. We are wary however of the depressing phenomenon whereby once principled conservative politicians ‘go native’ among the liberal institutions of state: the media as well as their opponents without and within their own party or faction. We have seen pragmatism devolve into vacuous opportunism among the governing elite before, and we fear we may be witnessing this now, once more.

If this process is in fact inevitable, what then is the point of parliamentary mainstream politics, other than as a sphere of competition between purely managerial styles within a mono-ideological state? This is the very essence of the present crisis of political confidence, at least for the principled conservative who rarely if ever has a candidate in whom he can confidently and unreservedly invest his franchise at the polling booth.

‘Katter’s Australian Party’ showed a great deal of promise as a potential ‘third force’ in the political landscape, one that could become the conscience of the establishment elite on Capitol Hill as well as the nation’s State and Territory Parliaments. As it presently stands, this potential seems to have been squandered for some kind of political expediency. Meanwhile, Bob Katter MHR appears to be an unreliable and disappointing alternative to the status quo, and the search for principled leadership within the mainstream continues unrewarded, for now.

Be the first to comment on "Conservative “Third Force”: Dying in Utero?"