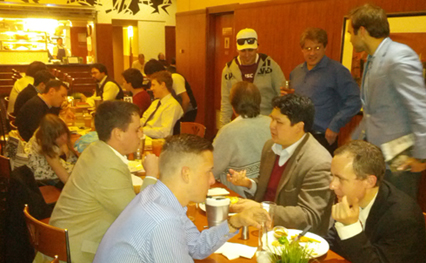 Last night, members of the “Conservative Cave” Facebook group met for their second dinner and drinks at Sydney city’s Great Southern Hotel. Traditionalists from the Sydney region came together for this second causal meeting at the iconic art deco hotel and bar located on upper George Street. Some attendees came with surplus books for the “book exchange”, which has become a regular feature for these meetings. The exchange took longer than expected since we had the largest amount of books for circulation and donation in recent memory (the book exchange was inherited from the “porktopia” dinners, which have been organised by local activists on the conservative scene for well over a decade).

The “Conservative Cave” has become a nexus for traditionalist conservatives of various types throughout Sydney and New South Wales, where topical issues are discussed and campaigns are planned. The group has been so successful that it has significantly increased its international membership this year alone. Although having an internet presence is vital for the exchange of ideas and campaign strategies, something more tangible is needed to create a socio-political movement which can stand up against the general liberal trends in the media and the academe.

Many of the local members of the “Conservative Cave” are students at the University of Sydney and University of Technology Sydney and the somewhat more distant University of New South Wales. Face-to-face and so-called “real-time” meetings such as these are vital to ensure that the traditionalist community exists not just as an online cyber-phenomena, but as a vibrant movement of conservative resistance to the dominant liberal culture on campus and politics generally. The first face-to-face meeting was held at the Great Southern Hotel on Friday 14 September 2012; the success of that meeting proved that there is a need for such networks in the greater Sydney metropolitan region. Last night’s success, in turn, showed that the local traditionalist lobby is a healthy, organic and growing force, particularly among university students and young professionals.

Be the first to comment on "Second Face-to-Face Meeting of the “Conservative Cave”, Friday 1 March 2013"