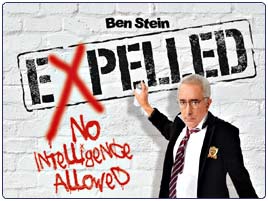 On 19 October 2012, the Sydney Traditionalist Forum held its second documentary screening at the University of Sydney. The evening’s function centred around Ben Stein’s film Expelled, No Intelligence Allowed, a investigative report about the effects of expressing pro-theist views by members of the scientific academy in US educational and research institutions.

The Convenor welcomed all attendees and noted that despite efforts to avoid clashes with other conservative functions for this evening, another event which was schedule at the same time unfortunately prevented some individuals from joining the audience. A contingent of Traditionalists had made the trip to the ACT to support the candidacy of a young Christian candidate for the upcoming Territorial elections. “Politicians make law, so the more right thinking Members we manage to promote into Parliament, the better, obviously. So we give our friends in the ACT our blessing and wish them the best result” he said.

For the benefit of new attendees, the Convenor mentioned that the Sydney Traditionalist Forum is run entirely on  voluntary basis and that the organisers intended the documentary screenings to be more regular, however, finding a suitable and affordable venue had been very difficult over the last several months. The campus Catholic Chaplaincy was acknowledged as a supporter of this event; without their assistance and co-patronage, the Sydney Traditionalist Forum would possibly have to raise funds to host the next function early next year, at the earliest.

The Convenor then mentioned two notable controversies that occurred since the Forum’s inaugural meeting in June of this year: the problems associated with the establishment of LifeChoices (a student pro-life group) at Sydney University and the University of New South Wales, and the resignation of Senator Cory Bernardi from the front bench after his speech to the Senate opposing homosexual “marriage”  legislation.

Before Expelled was screened, the next event was also announced: the screening of The Weather Underground, a documentary about the US leftist terrorist organisation headed by William “Bill” Ayres and Bernadine Dohrn. The Convenor mentioned that this would be in keeping with the academic, student and university campus theme of this year’s events so as to maximize interest among local freshmen. This theme would then naturally lead to a consideration of other topics of broader appeal to campus conservatives. The connection between the leading members of the Weathermen and the network of the seemingly ‘mainstream’ leftist political elite in the US was noted before a trailer was show of this next documentary.

The Convenor noted that it may be difficult to organise the next screening this year, given that the exam period and the end of session holidays were rapidly approaching. However, he said that if a third screening for 2012 were not possible, this would be postponed to early 2013.

Special guests in attendance this evening included Sławomir Olejniczak, who flew in from Poland to assist in the establishment of the regional chapter of Tradition Family and Property, an international group funded by Brazilian Catholic and counter-revolutionary intellectual Plinio Corrêa de Oliveira. Other guests also included the President of the Sydney University Conservative Club as well as members and representatives from Testify, a local group of young Christian activists, as well as the hosts of Carpe Diem, Sydney’s only Traditionalist and Paleoconservative community radio programme.

SydneyTrads was pleased to see that the Forum is slowly becoming a nexus for various and disparate traditionalist oriented groups to network, share ideas and support each other.

After the screening, about fifteen attendees joined the organisers at Essen (a local restaurant that specializes in Northern European cuisine) for dinner and drinks. The customary book exchange took place as the evening drew to a close with several publications being swapped and distributed; some books by Rogers Scruton and a few copies of the British Quarterly Review and Polonia Christiana were circulated.

We thank Logan Craft of Premise Media for permission to screen this film, as well as the University of Sydney Catholic Chaplaincy for their support and assistance in organising the venue for this event.

Be the first to comment on "Second Documentary Screening, Friday 19 October 2012"