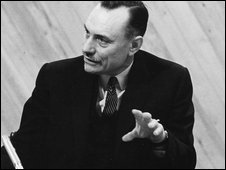 “There could be no greater misconception of the realities than is entertained by those who vociferously demand of legislation as they call it ‘against discrimination’, whether they be leader writers of the same kidney and sometimes on the same newspapers which year after year in the 1930s tried to blind this country to the rising peril which confronted it, or archbishops who live in palaces, faring delicately, with the bedclothes pulled right over their heads. They have got it exactly and diametrically wrong. The discrimination and the deprivation, the sense of alarm and of resentment, lies not with the immigrant population but with those among whom they have come and are still coming. This is why to enact legislation of the kind before Parliament at this moment is to risk throwing a match on to gunpowder. The kindest thing that can be said about those people who propose and support it is that they know not what they do.”

Quote of the Week: Matthew Crawford, “Shop Class as Soulcraft”

Be the first to comment on "Quote of the Week: Enoch Powell, “Freedom & Reality”"