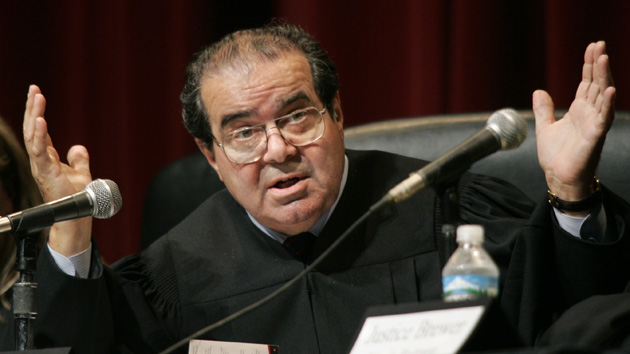 We offer our condolences to our American confederates on this day, for the passing of Associate Justice Antonin Scalia of the Supreme Court of the United States. Appointed by President Ronald Reagan, Justice Scalia represented the originalist and textual interpretation of the Federal Constitution, and was therefore associated with the judiciary’s conservative wing. Justice Scalia will undoubtedly be remembered for his scathing and acerbic demolition of the majority opinion in Obergefell v. Hodges [576 U.S. ___], a decision that formally abolished – via judicial fiat – the States’ democratically endorsed guarantee of marriage as a union of one man and one woman. The sentimentalist and politicised nonsense-language of the majority decision was under particular attack by Justice Scalia, who commented in a note to his dissenting opinion:

If […] I ever joined an opin­ion for the Court that began: “The Constitution promises liberty to all within its reach, a liberty that includes certain specific rights that allow persons, within a lawful realm, to define and express their identity,” I would hide my head in a bag. The Supreme Court of the United States has descended […] to the mystical aphorisms of the fortune cookie. [fn. 22 at pp. 7-8]

Denouncing the “the mummeries and straining-to-be-memorable passages of the opinion” [p. 4] Justice Scalia wrote that “what really astounds is the hubris reflected in today’s judicial Putsch” [p. 6]. The Putsch being referred to here was the trumping of the democratic process by the “reasoned judgment” [p. 7] of an unelected and unrepresentative elite:

Today’s decree says that my Ruler, and the Ruler of 320 million Americans coast-to-coast, is a majority of the nine lawyers on the Supreme Court. The opinion in these cases is the furthest extension in fact — and the furthest extension one can even imagine — of the Court’s claimed power to create “liberties” that the Consti­tution and its Amendments neglect to mention. This practice of constitutional revision by an unelected commit­tee of nine, always accompanied (as it is today) by extrav­agant praise of liberty, robs the People of the most im­portant liberty they asserted in the Declaration of Independence and won in the Revolution of 1776: the freedom to govern themselves. [p. 1]

The battle over so-called ‘same sex marriage’ will become a hotly contested political issue in coming months here in Australia, however it appears that this issue will be determined by way of a national plebiscite on the question. Nevertheless, Justice Scalia’s dicta is at once informative as well as entertaining. The following are excerpts worth repeating verbatim (his emphasis is retained in the cited italicized text; all italicized text, including brackets, are in the original): 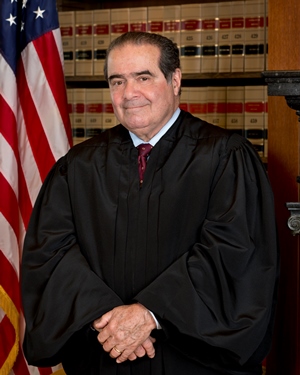 […] rather than focusing on the People’s understanding of “liberty” — at the time of ratification or even today — the majority focuses on four “principles and traditions” that, in the majority’s view, prohibit States from defining marriage as an institution consisting of one man and one woman.
This is a naked judicial claim to legislative — indeed, super-legislative — power; a claim fundamentally at odds with our system of government. Except as limited by a constitutional prohibition agreed to by the People, the States are free to adopt whatever laws they like, even those that offend the esteemed Justices’ “reasoned judg­ment.” A system of government that makes the People subordinate to a committee of nine unelected lawyers does not deserve to be called a democracy. Judges are selected precisely for their skill as lawyers; whether they reflect the policy views of a particular con­stituency is not (or should not be) relevant. Not surpris­ingly then, the Federal Judiciary is hardly a cross-section [p. 5] of America. Take, for example, this Court, which consists of only nine men and women, all of them successful law­yers who studied at Harvard or Yale Law School. Four of the nine are natives of New York City. Eight of them grew up in east- and west-coast States. Only one hails from the vast expanse in-between. Not a single South-westerner or even, to tell the truth, a genuine Westerner (California does not count). Not a single evangelical Christian (a group that comprises about one quarter of Americans), or even a Protestant of any denomination. The strikingly unrepresentative character of the body voting on today’s social upheaval would be irrelevant if they were functioning as judges, answering the legal question whether the American people had ever ratified a constitutional provision that was understood to proscribe the traditional definition of marriage. But of course the Justices in today’s majority are not voting on that basis; they say they are not. And to allow the policy question of same-sex marriage to be considered and resolved by a select, patrician, highly unrepresentative panel of nine is to violate a principle even more fundamental than no taxation without representation: no social transformation without representation. [p. 6]

The opinion is couched in a style that is as pretentious as its content is egotistic. It is one thing for separate con­curring or dissenting opinions to contain extravagances, even silly extravagances, of thought and expression; it is something else for the official opinion of the Court to do so. Of course the opinion’s showy profundities are often [p. 7] profoundly incoherent. “The nature of marriage is that, through its enduring bond, two persons together can find other freedoms, such as expression, intimacy, and spiritu­ality.” (Really? Who ever thought that intimacy and spirituality [whatever that means] were freedoms? And if intimacy is, one would think Freedom of Intimacy is abridged rather than expanded by marriage. Ask the nearest hippie. Expression, sure enough, is a freedom, but anyone in a long-lasting marriage will attest that that happy state constricts, rather than expands, what one can prudently say.) Rights, we are told, can “rise … from a better informed understanding of how constitutional imperatives define a liberty that remains urgent in our own era.” (Huh? How can a better informed under­standing of how constitutional imperatives [whatever that means] define [whatever that means] an urgent liberty [never mind], give birth to a right?) And we are told that, “[i]n any particular case,” either the Equal Protection or Due Process Clause “may be thought to capture the es­sence of [a] right in a more accurate and comprehensive way,” than the other, “even as the two Clauses may con­verge in the identification and definition of the right.” (What say? What possible “essence” does substantive due process “capture” in an “accurate and comprehensive way”? It stands for nothing whatever, except those free­doms and entitlements that this Court really likes. And the Equal Protection Clause, as employed today, identifies nothing except a difference in treatment that this Court [p. 8] really dislikes. Hardly a distillation of essence. If the opinion is correct that the two clauses “converge in the identification and definition of [a] right,” that is only because the majority’s likes and dislikes are predictably compatible.) I could go on. The world does not expect logic and precision in poetry or inspirational pop-philosophy; it demands them in the law. The stuff con­tained in today’s opinion has to diminish this Court’s reputation for clear thinking and sober analysis. [p. 9]

Quote of the Week: Robert H. Dierker Jr., “The Tyranny of Tolerance”