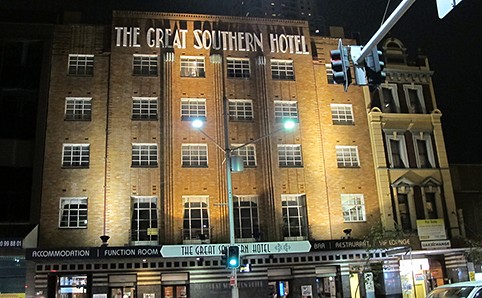 Last month, Sydney members of the Facebook group “the Conservative Cave” met for dinner and drinks at the Great Southern Hotel. Many of the Sydney Traditionalists who are active in political or social projects are also members of the online ‘Cave community and attend its periodic face-to-face events. This was the fourth in-person meeting of the Facebook group, which was organised by its administrator (who is also the host of Radio Carpe Diem).

The inaugural meeting of the Conservative Cave was attended modestly, however as evidenced by the turnout from this and the last event, attendance has quadrupled over recent months. The customary “book exchange” was conducted after dinner, with attendees sharing surplus literature among each other. These meetings are largely informal. Some of the ‘Cave members brought various objects of “reactionary” value, such as the pre-1997 flag of Hong Kong, and the post-UDI Rhodesian civil ensign; near the end of the evening, songs were sung over desert to the surprise of the other hotel patrons.

While the internet plays an invaluable role in allowing like-minded individuals to network online, the creation of a social movement cannot be achieved without “realtime” contact. The Conservative Cave catch-ups such as these aim to provide opportunities for individuals to network, exchange ideas and plan for future events and campaigns.