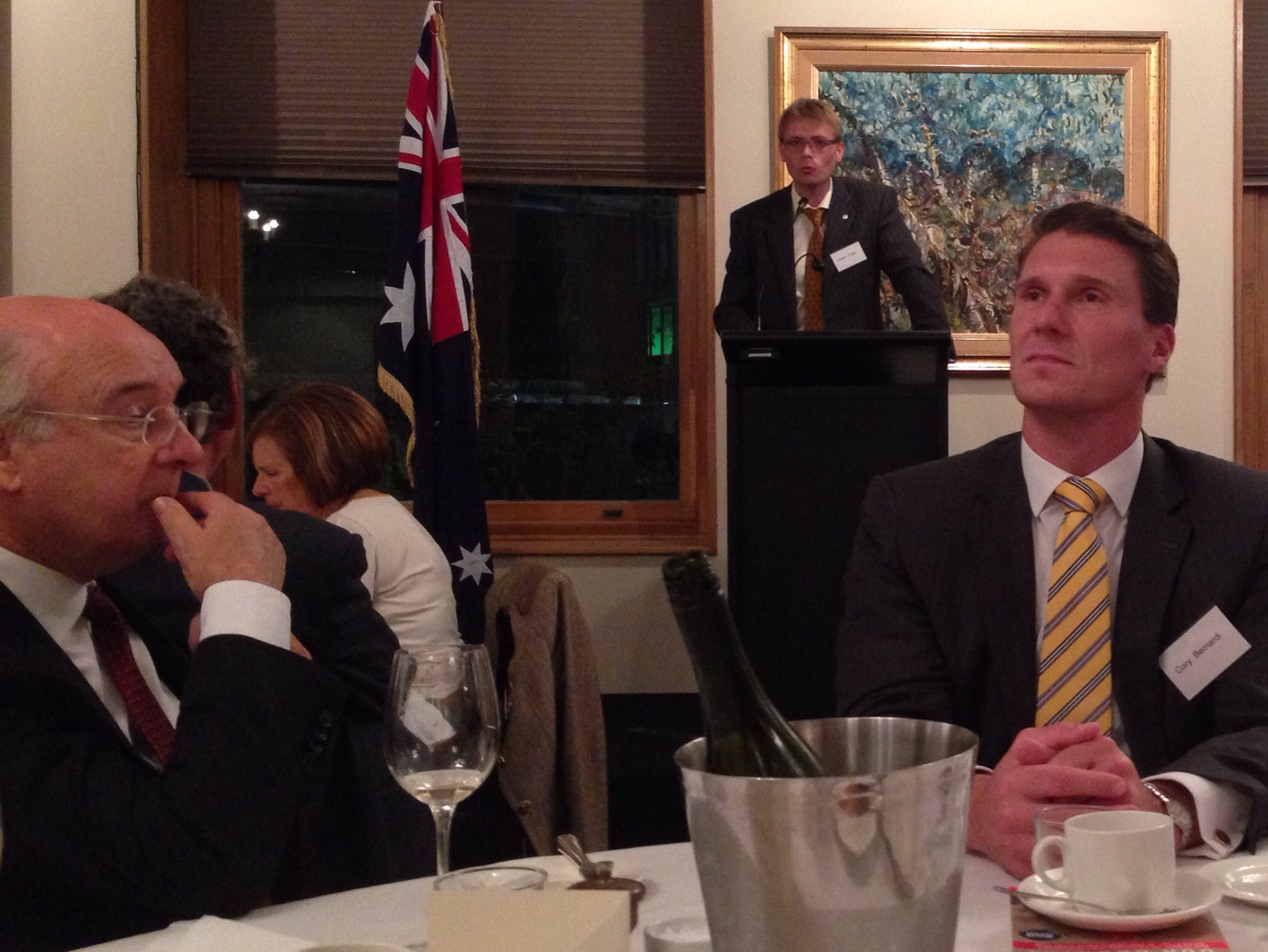 Senator Cory Bernardi, author of The Conservative Revolution and outspoken critic of modern liberal politics in Australia and abroad, was the guest speaker at the April Quadrant Dinner. The Convenor of the Sydney Traditionalist Forum was asked by Prof. Keith Windschuttle, editor of Quadant Magazine, to provide the opening remarks introducing Senator Bernardi that evening. The following is a transcript of those remarks.

I first met Cory some years ago at a function organised by a collection of conservative leaning branches of the state division of the Liberal Party, back when I was still a member. I recall many of us were rather disillusioned and disheartened with the turn that our movement had taken of late, and I dare say that many of us turned up to that function only because Cory was listed as the guest speaker. We certainly weren’t disappointed.

I remember Cory’s opening remarks then: he mentioned how meeting like those, indeed gatherings such as these, are a sort of “alcoholics anonymous” for conservatives. He stood at the podium and started: “Hello, my name is Cory and I’m a conservative.” Some of us were well and truly inebriated at that point, so we chanted back in unison: “Hello Cory!” We certainly fit the role well. It was an entertaining and amusing function.

That was the first time I heard Cory speak in the flesh, as it were, and I was impressed that somebody who the media tirelessly painted as some kind of dour retrograde demagogue of the right was in fact refreshingly humorous about his and our plight. This was possibly the first thing that Cory taught me, namely, that having a healthy sense of humour is essential if one wishes to survive and succeed in conservative politics these days.

So when I was organising a function for young conservatives at Sydney University in April last year, I naturally thought that Cory may have something to say to young people. I invited him to be our guest and he was gracious enough to accept. As expected we had a record turn out for one of our functions.

And this is something that I think needs to be emphasised:

While there is a narrative out there in popular discourse that young people are rejecting conservatism or are increasingly progressive, I certainly don’t see any real evidence of this myself. It is true that many young people do default to a left of centre position when discussing this or that controversy or such and such current affair, but that is rarely if ever a thought out position they occupy – it is usually the function of social pressure in a culture which is itself overwhelmingly liberal.

On the contrary, as I have been active on campus among conservative student groups, and among young professionals who can be described as politically ambiguous at best, I find that Cory has become something of a role model for the principled politician. In fact, the more he is assaulted by the usual suspects, the greater the Senator’s aura of authority seems to grow.

It is precisely Cory’s robust and uncompromising stance on civilisation defining issues that inspires the young people that I have had contact with. And these young people are in their final years of law, medicine, engineering, they are part of the future professional class of this country. This can hardly be described as a parochial group of people.

These young people do not believe that a concession to the left is a victory for the right. Instead they see it for what it is, an incremental capitulation to yet another leftist advance. Who would have thought some thirty or forty years ago, that a major corporation would have up to 57 different genders that people could pick and chose from when establishing an account with them? I don’t know about you, but I always chose “Two Spirited”… I have no idea what it means, but it sounds exciting… who knows, perhaps one day I might win something…

In any event, what these young conservatives see in Cory is a politician who take a principled stance and takes the fight to the left. And perhaps this accounts for the near obsessive and neck twitching reaction to Cory’s literary and parliamentary work.

Recently I read a blog post pretending to be a review of The Conservative Revolution, in which the “independent journalist”, which of course is code for journalist with an axe to grind, came to the realisation that Cory was no conservative at all, instead he was a “reactionary”. The word reactionary was of course used in a pejorative sense. Putting aside the fact that this description of Cory is debatable, I was forced to think, “so what?” Perhaps we have come to the point where merely preserving the status quo is not enough? Perhaps something more is needed? If we truly find value in our traditions, and if a great deal of our culture has been eroded, perhaps it is only reasonable to reclaim what was lost?

Of course, when the left calls for a “debate” or a “conversation”, invariably this too is code for: “agree with us, shut up, or disappear”. Well, the author of The Conservative Revolution is certainly engaging in a conversation, he shows no signs of shutting up, thankfully, and he’s here to stay! And he’s also being read. If I understand correctly, his book is well on the way to becoming a best seller this year. That says more about the legitimacy of his politics than the condemnation of people who obviously have not read his work.

Cory doesn’t just stand athwart history yelling stop, he reminds us where we’ve been, where we’re presently at, and where we’re likely to go if present trends continue. But there’s something I’ve learned about Cory tonight that I wasn’t aware of before. I did know that Cory was engaged in competitive sports before embarking on a political career, but I didn’t know that he also ran a pub for seven years. I suppose we now know where he gets his tenacity and resilience from! Running a pub, competitive sports, obviously there is no better training ground for a future in conservative politics in Australia.

And with that, ladies and gentlemen, it’s a pleasure for me to introduce to you my friend, and our ally, Senator Cory Bernardi.

Quote of the Week: Thomas Molnar, “Utopia, the Perennial Heresy”

Be the first to comment on "Sydney Traditionalists Introduce Sen. Bernardi at Quadrant Dinner"