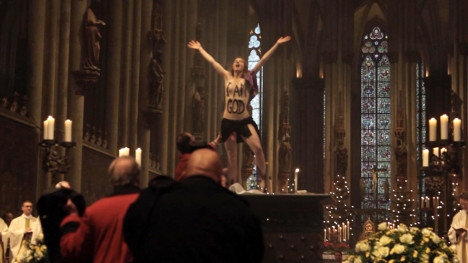 The phrase ‘I’m only intolerant of intolerance’ seems as silly as ‘the only thing we have to fear is fear itself’. They’re both sort of catchy rhetorical phrases, but they’re also perfectly meaningless. We might as well say, ‘I’m only allergic to white blood cells’. Intolerance, fear, and an immune system are the basic defense mechanisms of a healthy organism, be that organism an individual animal or a whole civilization. 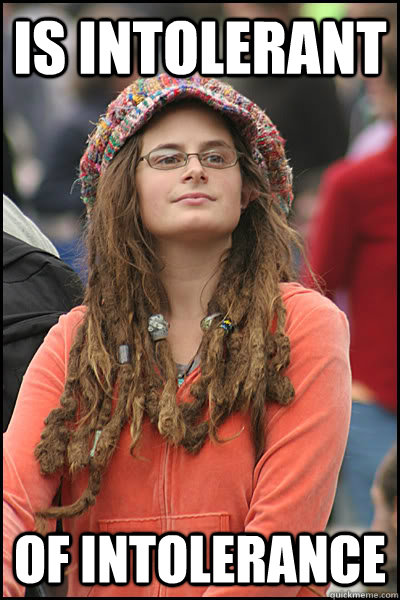 Of course they can be abused: we might be intolerant of people who don’t like white wine or afraid of plumbers. Some things can trigger an inappropriate immune response—we call them allergies. But that some of us have allergies—that intolerance and fear have been misused in the past—doesn’t mean we should get silly about the opposite. To thinking people it would be absurd to tolerate a corrupt politician, refuse to fear an oncoming train, or suppress a gag reflex after accidentally swallowing Windex. And yet we’re still left with these quirky little phrases that sound rather pretty but in fact give us no insight into how to conduct ourselves reasonably.

I won’t make any undue slight by pointing out that the first two are proffered by the eminent radical leftists of their own time: the fear quote is, of course, FDR, and the tolerance line belongs to the Progressive of the 21st century. Who will champion the inevitable ‘I’m only allergic to immunity’ line is yet to be seen, but a professor at the University of Sydney has said he believes cancer is a construct—that we could just as easily say that chemotherapy is the ‘disease’ of cancer cells which needs curing. I only have my doubts that he’s on the right wing of politics.

But for now, the Emmy goes to ‘I’m only intolerant of intolerance’. Let’s dissect this line in the context of the radical Leftists who espouse it. From observation, here’s a list of their ‘intolerable intolerances’:

(1) Adherence to any strain of Christianity, usually Judaism, and sometimes Islam;

(3) Support for any economic system that affirms private ownership of property and any measure of economic inequality;

(5) The existence of nations, and simultaneously that a certain few nations aren’t responsible for the wholesale depression and exploitation of all others;

(8) That sexuality should be at all considered according to a standard of subjective or objective morality;

(9) That sex between a male and a female is ever not rape;

(11) Any concept of human psychology that does not recognize the sole motivator of human thought and action to be sex;

(12) That history isn’t an explicit chronicle of abuse and oppression by white, affluent, heterosexual males, and should not be taught as such in all possible educational outlets;

(13) That aesthetics should be at all considered according to a standard of objective or subjective beauty;

(14) That culture exists either subjectively or objectively, and simultaneously that subcultures or minority cultures shouldn’t be given special attention and support;

(15) Literary, artistic, musical, and architectural expression that does not explicitly affirm a rejection of the above intolerances.

Be they right or wrong, this can’t by any stretch of the imagination be called ‘tolerance’. What diversity could such a society actually have?

In government, maybe the Anarcho-Communists and Libertarian Socialists will be at each other’s throats. For entertainment, the most we could hope for is a ‘person’ (if speciesism is still tolerated) who identifies as gender ‘Two-Spirit’ writing a book in post-structural Esperanto about the horrible 21st century where people still believed in melatonin, or a ‘Gender Queer Intersex’ person sculpting an ‘abstract’ monument to Lacan out of dirty underwear and cigarette butts. That’s also tenuous, I suppose—underwear might be considered offensive to nudists and have to be banned altogether. But a world that embraces ‘diversity’ in art, and yet considers any artistic expression but Brutalism to be patriarchal, racist, and Eurocentric, of course isn’t diverse—it’s just Brutalist

Am I paranoid? I hope these fears were unjustified. But anyone who’s spent any amount of time on a university campus in the last decade (or read Pink News, or a few of the chaps who write for the Huffington Post), they might validate my concerns. It seems to be a slippery slope if only because the demands are increasingly radical and are appearing ever more rapidly. I’d never heard of ‘Neutrois’ before Facebook launched their new gender options, but apparently there are enough of them that they merit such a public designation.

Really, though, I don’t think there’s that many of them at all. I think the Progressive lobby is so loud, organized, and well funded that they can shove us vigorously down that slope at whatever pace they choose.

If I were a betting man I’d put everything on one prediction: that when this tragically thin definition of tolerance is exposed—probably after most of these aims have been achieved—the Left will dump the idea of tolerance altogether. Then the ideological teeth will come out. I’d also bet there will be a new name for such an ideology. I can’t imagine what it is, but I can imagine that it’ll be proudly intolerant of all the perceived wrongs listed above—and many more. Maybe once us conservative Christians are history, the Nongender-identifying comrades of 22nd century will turn on ‘transwomen’ for adhering to even a sliver of that dark, barbaric past where a mere fifty gender identities were recognized (Philistines!). Who knows? We live in strange, nonsensical—increasingly boring and pedantic—times. The future is beyond the reaches of our wildest, most inane imagination.

The author is a native Bostonian currently studying at the University of Sydney. He is an officer of the Australian Monarchist League. His personal blog is “The American High Tory”.

Quote of the Week: Mary Eliza Haweis, “The Art of Beauty”

Be the first to comment on "Won’t Someone Please Think of the Cancer?"