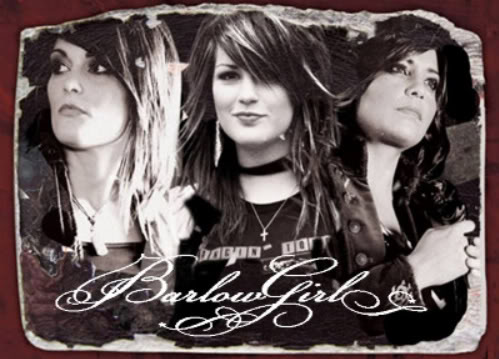 What follows are programme notes for the “Conservative Song” segment of Radio Carpe Diem compiled by Luke Torrisi. The notes were produced for a broadcast of 11 April 2011, and form the basis of a live on-air discussion about conservative and traditionalist themes that can be inferred from items of popular music. Radio Carpe Diem is Australia’s only paleoconservative and traditionalist radio programme and can be accessed online or free to air at 88.9FM at 8:00pm to 10:00pm Mondays (Sydney, Australia). Readers’ comments are welcome here at SydneyTrads. Listeners are encouraged to tune in and engage in the discussion.

Barlow Girl are an obviously Christian band. The group consist of three sisters who were home schooled by their preacher father in South Barrington Illinois. Originally they assisted their father in producing concerts and albums, but then they went out on their own and had great success in the Christian music market of the US. They have even had a song written in their honour by fellow Christian musicians, Superchic. They’ve won a string of Gospel Music Awards and several hit songs.

There is more to them however, than just another Christian band. There is a distinct Conservative slant to some of the lyrics, perhaps inspired by youngest sister Lauren who is an avid followed of A. W. Tozer, an early 20th century preacher who advocated the simple life and principles of antimaterialism. He also rejected pursuit of innovation for its own sake and saw that as the path to a negative materialism echoed in the words of famous Conservatives such as Russell Kirk and Peter Viereck.

In this particular song “Grey” we see this antimaterialism vibrantly. The song is about hiding your true morality and living therefore in banality. It smacks of critique of the modern world and in particular “fad” culture.

The opening line “Grey is my favourite colour” says it all. In the subjects mind, there is no black and white – clarified by the next line “Black and White has never been my thing”. Cleary we aren’t talking about colour preferences here, the song is about values and the corruption of moral relativism. This is confirmed by the short second stanza “Absolutes are hidden / I’ve buried my convictions.”

The chorus however offers a notion of salvation. The singer describes herself as “numb” and “blind” and compromising for lies. Clearly she realises that she is denying the reality of the moral condition for convenience of fitting in. She tries to justify her inadequacies by getting rid of all that inconvenient moral certainty. She cries out for “Your passion” as the solution to her dilemma. No – this is not a love song, with a lost teenage girl seeking refuge in the arms of a boyfriend fresh from the cast of Twilight, rather the singer is acknowledging the Passion of Christ.

The next stanza we here the usual raft of excuses as to why people don’t offer up their real convictions in public discourse and why the banal, materialistic, moral relativism grows through lack of comment from committed Conservative Christians. Just to make sure you get the message the final stanza implores “GOD give me your fire” – that part of the divine, that hotline to the almighty, the conscience is trying to reignite a moral fervour in this individual who is clearly in the middle of an intense struggle.

The song doesn’t appear to offer a final resolution as it offers the final line “Grey’s my favourite colour.” We are back where we began. However, this reminds us that most of the spiritual struggles in life are ongoing. The average person is tested upon the same moral issues repeatedly and eternal vigilance is required to defend them – not unlike freedom from the incursions of the state.

The song explores for us this notion of moral relativity as the socially safe option. In doing so one acts upon sentiment rather than virtue and a as consequence, one might feel immediate satisfaction in acceptance, but at the cost of long term purpose.

For the Conservative there is a deeper message than even the Christian on here, in fact the two merge as they probably should in the context of the Occidental world. In this song we see the reinforcement of the following principles of conservatism:

Even though it is called “Grey” clearly the song is encouraging us all to look beyond the shades of it and into the light and away from the darkness.

Grey’s my favorite color,
Black and white has never been my thing,
I’ll take my drink lukewarm now,
Hot and cold is not the thing for me

I cannot be blind no more,
Numb to what I’m living for,
Help me stop this compromise that justifies these lies,
I need Your passion in this life.

I don’t want to impose,
Who really needs to know what I believe,
Cause no one likes rockin’ boats,
And who would care to see the way I see.

So give me the fire, yeah,
God give me Your fire,
And raise this life high.

Be the first to comment on "Thinking Right About Pop Culture: Barlow Girl – Grey"