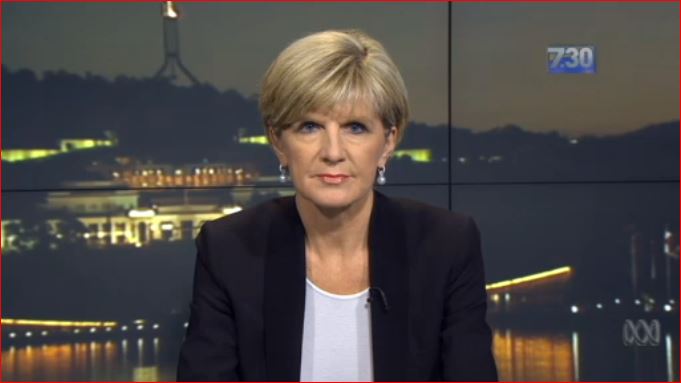 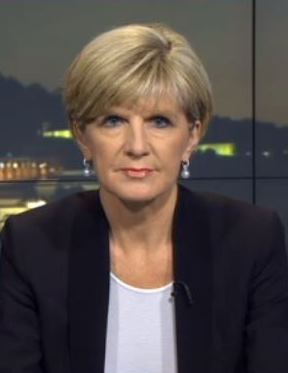 Only four days ago, SydneyTrads noted the rise of anarcho-tyranny in Australia as a result of the Coalition government’s plans to demand that citizens returning from terror stricken regions of the globe may be required to prove to authorities that they are not in fact terrorists themselves, thus reversing the presumption of innocence. Last evening, the Foreign Minister Julie Bishop was interviewed by Sarah Ferguson on the ABC’s “7:30 Report” in relation to this proposed amendment, as well as the government’s decision not to repeal Section 18C of the Racial Discrimination Act, which makes it an offense to ‘offend’ a person on the grounds of, among other things, their ethnic identity.¹ These two decisions, to reverse the onus of proof in one area of the law and not repeal anti-free speech provisions in another, come at an interesting moment in Australia’s social evolution: According to the National Terrorism Public Alert System, the threat level in Australia is medium: “terrorist attacks could occur”.²

The background to the 18C controversy has been covered here previously and need not be repeated again, however we note that Minister Bishop justified the government’s scrapping of plans to repeal the provision on the grounds that “circumstances have changed” and that it was a “distraction” from other important matters, such as the steps that need to be taken by authorities in relation to terrorism threat prevention. The Minister indicated that the proposed laws could or would hinder the ability to “communicate”, presumably with certain sections of the community, in relation to matters broadly pertaining to the threat of terrorism.

Her answers were of course customarily vague. However another report, this time on the front page of today’s Financial Review may provide a clue as to the meaning behind these two developments.³ The FR article indicated that certain Members of Parliament, particularly those in key electoral seats, have called for the government to take a more “neutral” stance on the Gaza conflict. These MPs are themselves members of the governing Liberal Party. The concern is that a view is developing among the local constituents of these seats that the government is biased towards Israel and that this will adversely impact on the relevant Parliamentarians’ ability to retain those seats at the next election.

The key seats are of course multicultural and have substantial Islamic populations on their electoral rolls. Why else would these Parliamentarians feel the heat from voters in these regions and in relation to such a hotly contested issue? Presumably, authorities will need to avoid creating an environment of antagonism with these ethno-religious communities and their representatives. Otherwise, they will not be able to do their jobs in properly investigating the initiatives of hostile groups which may be ensconced within the multicultural ghetto. Authorities being able to communicate effectively will obviously be vital to this end, and this is perfectly understandable.

However, the underlying message which can be inferred from the governments recent actions is of deep concern: the protection of the communication between citizens about the underlying reasons for the existence of terrorist threats in Australia is to be sacrificed for the ability of authorities to be able to communicate with representatives from subcultures in which threats of terrorism may emanate. The sphere of communicative freedoms seems to be shifting from one place to another, and this does not appear to be a healthy development for civil society and its law abiding members. The refusal to shred the tyrannical section 18C only crowns the anarchy created by government policies that foster the social environment in which controversies such as these arise in the first place. Thus an allegedly “conservative” government:

♦ opts to keep laws on the books which penalize honest debate on issues of burning concern to sections of the community and which effectively promote the ideology of cultural-Marxism by statutory fiat;
♦ fears the internal electoral threat of foreign national interests, and will expectantly accommodate their demands; and finally,
♦ will legislate further oppressive laws as a response to the resulting social anarchy.

In a response to an Islamist rally in the heart of Sydney’s Central Business District in September last year, and partly in relation to the Prime Minister’s rather naive assertions that the protesters’ loyalties were to this country, we wrote of the establishment conservatives’

“failure in drawing qualitative distinctions between very different cultural groups has been the undoing of other Western societies whose mistakes he [the Prime Minister] refuses to acknowledge or learn from, and that is deeply distressing. It does not appear to be of much concern to our official ‘conservative’ political class that sentiments which warm towards jihad and sharia are finding expression among Australia’s growing Islamic population […] The portraits carried by the protesters in Sydney last Sunday did not depict the visage of any Australian politician, but the Prime Minister of Turkey, Recep Tayyip Erdoğan.”4

We were wrong. The government can and will indeed draw qualitative distinctions if and when it needs to. In our previous report, we noted Leader of the Government in the House of Representatives, Christopher Pyne’s statement that a “risk ranking system” in the proposed laws to reverse the onus of proof is “an embarrassing admission that a sane border and immigration policy reform cannot avoid an element of discrimination in its practical application.”5 However, now that section 18C will remain on the books, discussing the particulars of why this is so may be an act prohibited by law. Any such discussions, which may naturally lead to speculations about demographic trends and the policies that have lead to them, may be ‘offensive’ to certain members of Australia’s ‘diverse’ society.

Unfortunately, the mainstream political establishment has worked itself into a fix it does not seem capable of exiting: the centralist and harsh legal requirements being proposed are now necessary, and they are necessary because the demographic problems caused by naive universalist policies drafted by aging generation of ’68 have resulted in social pathologies now impossible to correct. Nobody can say that there is no precedent from which today’s politicians and policy analysts cannot learn from. In the July 1990 issue of Chronicles, the one who coined the term anarcho-tyranny, Sam Francis wrote that:

“The late Roman Empire, the Byzantine Empire, the Ottoman Empire and the dominions of the Habsburgs and the Romanovs, among others, all presided over a rainbow coalition of nations and peoples, who for the most part managed to live happily because their secret compulsions to spill each other’s blood were restrained by the overwhelming power of the despots and the dynasties who ruled them. Political freedom relies on a shared political culture as much as on the oppositions and balances that social differentiation creates, and when the common culture disintegrates under the impact of mass migrations, only the institutionalized force can hold the regime together.”6

We are currently witnessing the institutionalisation of force in Australian law and governance before our very eyes. If allegedly conservative governments will be more readily persuaded by electoral threats from exotic voter blocs, it is sheer fantasy to expect that any real steps will ever be attempted to correct the cultural vandalism of the mainstream establishment’s aging hippy political class and their idiocrat younger followers within the overwhelmingly progressive media and fortresses of academic abstraction. If the current terrorism risk levels for Australia are medium, the rate of anarcho-tyranny in this country seems to be climbing towards high with each passing electoral cycle, while the faint line of demarcation between House Conservatism and Progressive Étatism continues to blur.

Poetry by Luke Torrisi: “What Would Enoch Say”