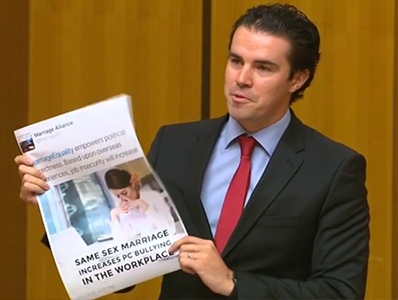 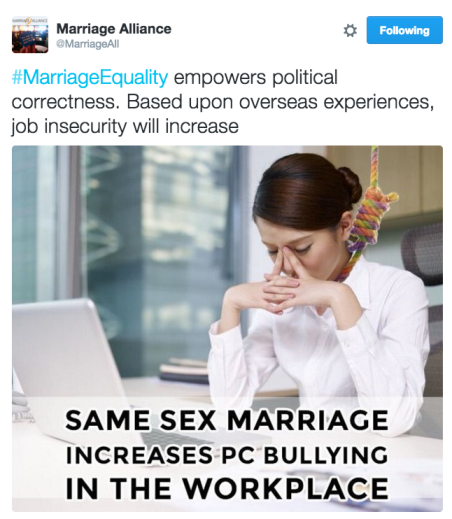 The Tweet that was published by Marriage Alliance last Wednesday, showing the controversial “rainbow noose” Meme.

In a move that has ironically validated the claims of Australia’s main pro-marriage lobby group, FaceBook has temporarily “blocked” Marriage Alliance from using its platform. The 24 hour block was placed on the marriage group’s account due to its posting a meme that figuratively dramatizes the choking effect of political correctness on freedom of speech in the employment environment. The meme, which shows a rainbow noose wrapped around the neck of a female employee, who appears to be under pressure or in distress, seems to have thrown the self declared purveyors of tolerance and free expression into a fit of hysterics.

Indeed the legitimate message of the meme illustrates that a soft totalitarian agenda accompanies the aggressive push for the legalisation of so-called “gay marriage”. This involves a subtle but insidious clamping-down on employees who do not conform to the accepted progressive mantras of left-liberalism. In stamping out perceived violations of the social media network’s terms of services, FaceBook has demonstrated that this soft totalitarianism has infected and spread beyond the mere confines of the employment sector. Marriage Alliance’s initial message was clear: people feel that contrary views cannot be expressed for fear of losing their jobs or missing out on promotion. Historical experience, particularly from overseas, has shown beyond a shadow of doubt that this is no misplaced fear. FaceBook’s move illustrates that Australia will be no exception to this degenerative trend. Any moves by concerned groups that warn the public about the unintended consequences of enforced ‘tolerance’, especially if enforced according to political or ideological dictates, will themselves not be tolerated. 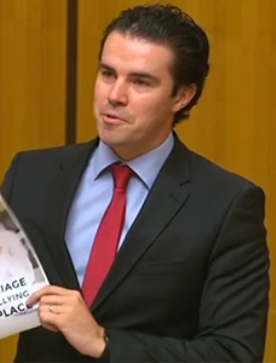 Two days before FaceBook’s posting ban was thrown over the conservative group, and within little more than 12 hours of the “RainbowNoose” meme going public, Tim Watts of the Australian Labor Party denounced it and Marriage Alliance in the Commonwealth House of Representatives’ Federation Chamber. Watt’s at times unhinged denunciation immortalized the campaign and the meme into Hansard (4 February 2016) drawing more attention to the issue of workplace PC bullying. Oblivious to the Streisand Effect, those who have been most sensitive to the meme and have attacked Marriage Alliance for daring to point to the obvious don’t seem to notice that their actions have confirmed the meme’s core message. In this environment, can an employee (or anyone) say ‘no’, disagree, or even just remain neutral to the issue of same-sex ‘marriage’? Can such a person safely express an opinion that does not flatter the advocates of this latest attempt at overthrowing an institution that predates even the state itself? Can one’s conscience be freely exercised now that the peak body of Australia’s ‘No’ campaign is being forced to suffer the full brunt of online PC censorship? 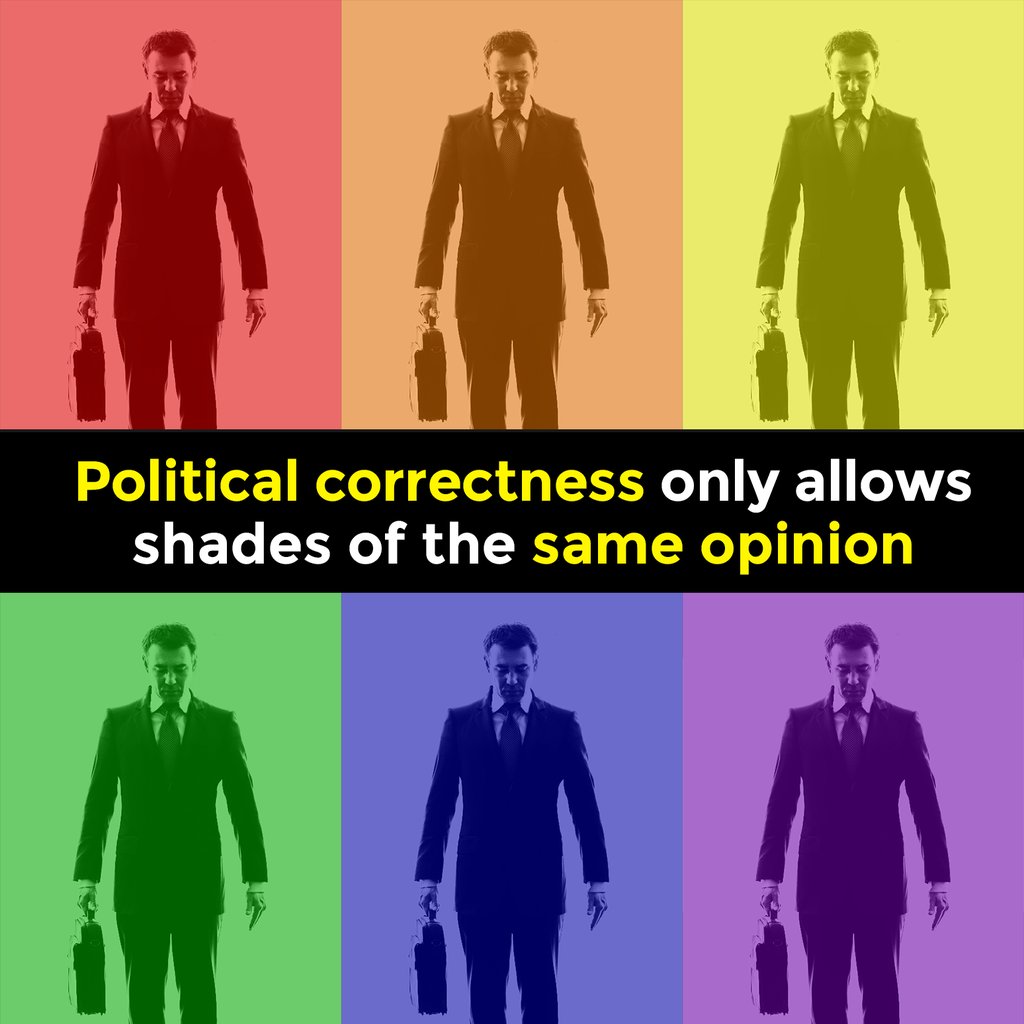 Apparently a man of many words, Tim Watts described the meme as “crap” before launching into a diatribe against Marriage Alliance. “Despite their bleating [sic], these groups do not want a debate. A debate implies that there are people who are willing to change their minds” he declared. Judging by his own language however, Watts’ own mind does not appear amenable to much change itself. This is no surprise. His reference to the “completely unnecessary $160 million marriage equality plebiscite” – which will allow the Australian public to decide whether or not to legalise ‘gay marriage’ – betrays a fundamentally anti-democratic attitude common among those pushing gender ideology onto the unwilling or unsuspecting. Despite this, the mainstream commentariate seems to be blissfully unaware of the fact that here it is the agitators of the sex-obsessed left who are imposing their morality on the public.

FaceBook’s block underscores the need for an alternative media and social networking platform to those who want to say ‘no’ to the New McCarthyites of the progressive establishment. If 2016 will indeed be the year of the ‘Great Shutdown’, let us hope that technocrats among the alternative online right will provide a much needed respite from the thuggery of militant liberalism.