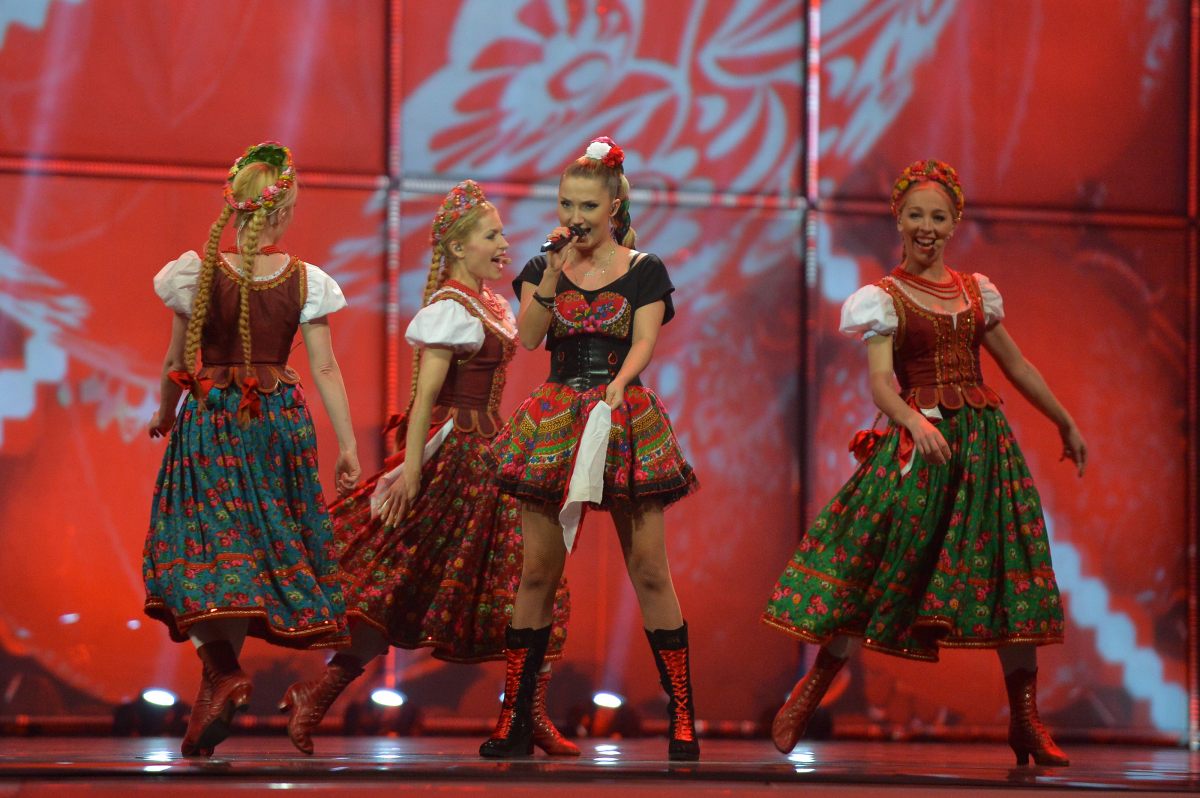 It seems that even displays of national pride need to be couched within liberal ideology. In Poland’s case, patriotism was filtered through sexual libertinism. – SydneyTrads Editors.

One could say that the Eurovision song contest is the Liberal Olympics except that the Olympics have themselves become so attuned to the zeitgeist it is more accurate to refer to Eurovision as the Liberal Culture Olympics, liberal sport being left to the festival of the rainbow rings. And it certainly is a contest of culture, between the liberal zeitgeist of the EU hegemony and small national pockets of resistance.

The final started this year with a new rendition of last year’s winner from Denmark Only Teardrops which featured (through the magic of social media) a multi national choir of selfie soloists warbling along with the gorgeous Emmelie de Forest. On a display that would move Mark Zuckerberg to tears the selfies plopped up on a giant screen of a spinning globe with occasional rainbow flashes of light. Rainbows featured more prominently than usual this year, maybe as a reaction to the gloomy Danish weather. It was also nice to see that generally no one over 30 was represented and many of the singers like one from Australia were very diverse. The motto of Eurovision this year was “join us” so maybe the EU was on some sort of immigrant or member state recruitment drive.

The Iceland entry continued the rainbow theme with their colorful suits, in all of the colours of the rainbow. Indeed the drummer Arnar Gislason wore pink and has spoken of being pleased with the normalizing effect his colour had on boys wearing pink. This band is actually a children’s band a bit like a herring flavored version of the Wiggles. Indeed most members of the band are school teachers except one member who is a member of parliament (perhaps Peter Garrett can start a third career as the scary Wiggle). The song was called “No Prejudice” and was apparently about the evils of bullying. It has great lines like “everybody looks the same inside”. Too bad Eurovision rules are not so tolerant when it comes to say religious references, so perhaps the title should have been “No Prejudice of a Type Allowed by the EU Human Rights Overlords” but that would not be so catchy. 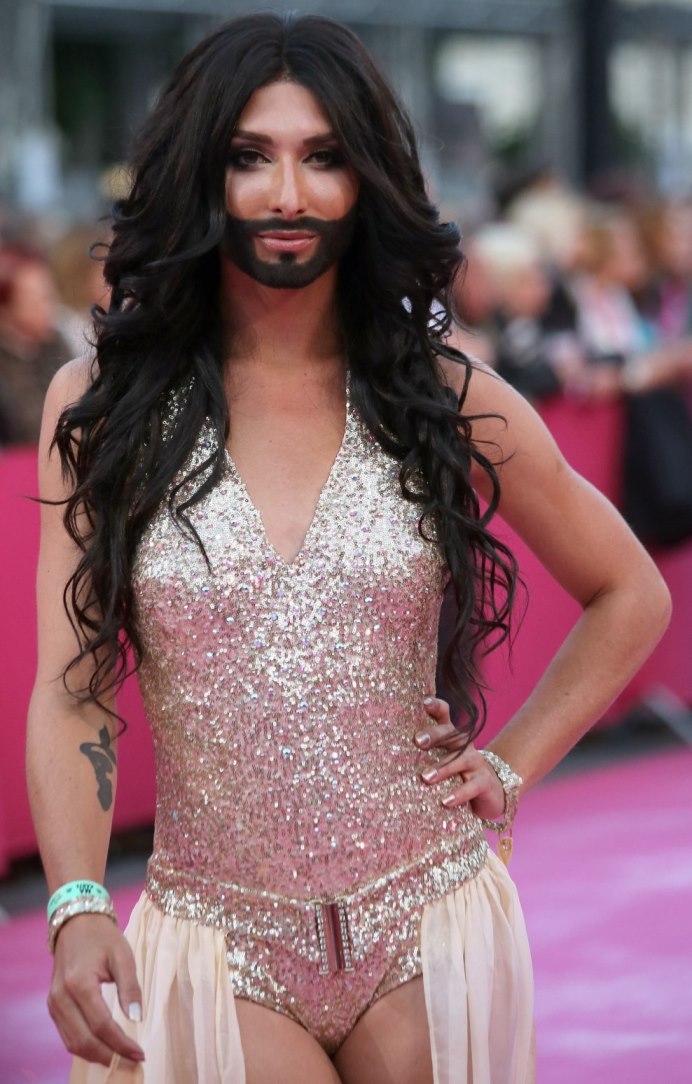 The Austrian entry: the Bearded Lady. Liberal Utopia is where the circus freaks set the standard. – SydneyTrads Editors.

Now we cannot go around criticizing the winner Concita Wurst. Indeed we literally cant, we’d be off air. The Armenian entry did and was forced to hastily apologize. We suspect that Ru Paul would also have harsh words if Concita was a contestant on Ru Paul’s Drag Race but even old school gay icons have been left behind in the rush to exterminate all genders. What we can say is that from some angles Conicta does resemble the long haired Jesus that features in European art. Indeed there is a particular arm’s outstretched pose in the live performance that more than anything hints at our crucified savior. The song Rise Like a Phoenix is all about resurrection. Clearly the Eurovison ban on religious references does not extend to blasphemy. Backstage Concita said “I dream of a world where we don’t have to talk about unnecessary things like sexuality, or who you love, I felt like tonight Europe showed that we are a community of respect and tolerance.” Well Concita we look forward to your future work referencing other bearded religious figures and hope that tolerance continues.

I do wonder whether Australia’s own star commentary team of Julia Zemiro and Sam Pang were a bit behind the zeitgeist when referring to Concita as a “she” when clearly the character was railing against our binary genderism. Indeed it struck me as odd that the both the SBS and ABC did the same when referring to local broadcast area resident Norrie May-Welby who in fact went to the highest court in the land for the right to be referred to, not as a he or she but as neuter. I think the SBS hacks need retraining on factual matters generally as they referred to Jessica Mauboy’s appearance as the first time an Australian has been on Eurovision, ignoring the fact that an Australian has actually won it (actually the only person to win it twice – in 1980 and 1987: Johnny Logan) and that icons such as Olivia Newton-John have appeared in the past. 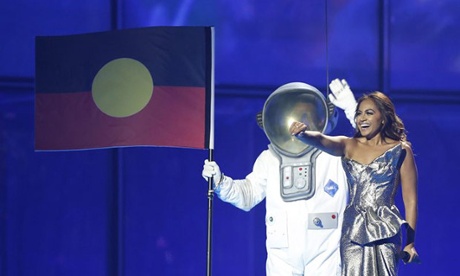 Australia’s Jessica Mauboy performs at Eurovision. Ethnic pride is OK, so long as it’s not the wrong ethnicity. – SydneyTrads Editors.

I can proudly say that the Australian performance was as liberal as the best of them, it was a bland tune in English (as native languages are frowned upon), having a non-European singer, a number of cross dressing dancers and rainbow flags as well as an astronaut bearing that orange dot flag that some Australian Aboriginals consider to be a national flag. It’s a shame that the composer of this tribute to blandness didn’t know much about the unique sounding Australian music of the past, at least not as much as the Slovenian entry Tinkara Kovac knew about Australian music – performing a few bars of “Down Under” on her flute for a stumped Julia “Rockwiz” Zemiro.

In contrast there were some decidedly old fashioned entries such as Poland’s which not only featured Polish lyrics and national costume (as sure way to upset the Euro judges) but also explicitly focused on the physical qualities of women of the Slavic race. And upset the judges it did, not getting any points from the official juries but getting the majority of the popular vote. As the system of voting combines the popular vote with an equally weighted judge’s vote it combines the worst of crass populism with an elite that vetoes any populism that goes beyond its acceptable boundaries. I suspect it may eventually be the model for future EU elections.

But the big gun for the anti-EU brigade was the Russian entry – which apparently got booed by the crowd. It was performed by the gorgeous Tolmachevy Sisters, 17 year old twins that are a paragon of binary femininity right down to their modest flowing beige gowns and bare feet. They are the anti-Concitas. They also have form, not only winning junior Eurovision back in 2006 but also performing a lovely ditty called Katyusha (after the deadly rockets used by the Red Army) in the 2007 Red Square victory parade (in child sized army uniforms). No wonder some have read the lyrics of the song to be a sinister reference to the Ukrainian conflict, for example:

Been looking at the sky,
wishing on a star,
waiting for a brand new start.

Living on the edge,
closer to the crime,
cross the line a step at a time.

What was even more interesting was the visual performance with the twins back to back with their hair intertwined performing on a see-saw. They held onto Perspex rods (that looked a bit like light-sabers) and what was striking is what happened when they parted. Each raised a rod and held it up like a sword, one in her left hand and the other in her right in a mirror image. To my mind they resembled what was once the world’s tallest statue “Motherland Calls” the monument to the siege of Stalingrad. After this pose they moved to opposite ends of the see-saw and it started swinging.

MH17 Victims: May they Rest in Eternal Peace

Questions for Conservatives After the Electoral Victory

Be the first to comment on "The Liberal Culture Olympics"