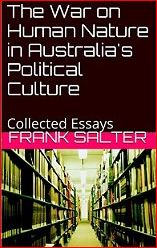 Dr. Frank Salter has been a critic of the progressive social project in Australia for at least the past several decades. It is rare to find an academic applying the skills of critical analysis with the aim of testing, investigating and debunking the Utopian claims of cultural Marxist policy. Salter’s tenacity, persistence and patience suggests that his work forms a substantial component of the intellectual vanguard among those who have the courage to challenge the political status quo.

While Salter is perhaps best know for his On Genetic Interests – which was published through Transaction in 2007 – he has recently had a string of extended dissertations printed by Australia’s only mainstream Conservative journal, Quadrant. Five of these have been republished late last year in a book of collected essays, along with an additional unique chapter on Hiram Caton, who is described as an “Australian Pioneer of Biosocial Science” and who passed away in 2010.

The collection of essays, titled simply The War on Human Nature in Australian Politics is available as an eBook via Amazon at $7 (Australian) for the Kindle. The subjects explored include gender studies, race and the national question in the media and the universities and a brutal critique of open borders advocacy. The six chapters explore these and related themes in a tightly packed collection of arguments for the political and social scientist alike. While the book will certainly refine the Conservative reader’s ability to question and impeach leftist social policy, it will also be an enjoyable challenge to the progressive policy analyst.

In an early essay published by Quadrant in June of 2012, and which forms the basis of Chapter 1, Salter opens by reflecting on his past experiences with the narrow mindedness of ideological leftists in the academy:

“The intellectual insularity of the social sciences was not a new theme. I had written about sociology’s rejection of biology in a 1996 review of The Concise Oxford Dictionary of Sociology. The Dictionary was embarrassingly true to the Standard Social Science Model that has been dominant since the 1930s, according to which the mind and behaviour are shaped only by culture. The Dictionary defined childhood, not as a critical stage of development that is genetically programmed and common to Homo sapiens everywhere, but as ‘constructed on the inabilities of children as political, intellectual, sexual, or economic beings, despite empirical evidence to the contrary. [This] serves the needs of capitalist states’. The ‘Marriage’ entry did not mention reproduction or child rearing. The entry under ‘Sex’ denied the existence of instinctive sexuality. The ‘Race’ entry denied that visible racial differences are the product of genes. There was no discussion of reproductive interests except for the usual mantra concerning social Darwinism, Herbert Spencer and eugenics. Many of these entries openly criticised conservative values, defining the latter so broadly as to include middle of the road values. There was no entry for ‘Patriotism’.”

The string of contemporary examples that follow illustrate how the politicization of the social sciences in the Australian academy, media and business culture lead to its ultimate loss of credibility. That logically leads to the inability of academic, cultural and political elites to confront reality on its terms, and in turn, this create fertile ground for the formation and propagandizing of harmful or destructive policy. The message can be essentially put thus: politically induced intellectual blindness leads to a generally dysfunctional social environment.

Another notable essay focuses on the immigration debate, and in particular the of advocacy of ‘open borders’ policies by both the official left and self-styled opponents to leftism who nevertheless pay tribute to leftist idols. That piece, which appeared in Quadrant in June 2010, commences with a frontal assault on the ‘diversity is strength’ mantra:

“Unrestricted migration would harm Australia’s national interests in ways documented by scholars in economics, sociology and related disciplines. Much of the harm is predictable from what is known about the dysfunctions of diversity. They include growing inequality in the especially invidious form of ethnic stratification. No one likes to be ruled over by a different ethnic group or to see his own people worse off than others. The result is resentment or contempt, depending on the perspective taken.

Readers may recall the 2007 work of Robert Putnam, whose own research lead him to identical conclusions that embarrassed the multicultural industry, particularly in the United States. Putnam’s work features in Salter’s extensive bibliography here as well. However, what is notable in Salter’s work is that he does not save his criticism for the official left alone. Using the example of Chris Berg (of the Centre for Independent Studies) he illustrates that the mental paralysis induced by universalist liberalism stretches across the entire mainstream political spectrum:

“The intellectual void surrounding the concept of the nation becomes most apparent when Mr. Berg wonders why an otherwise consistent libertarian, Murray Rothbard, thought that culture is worth defending by restricting immigration (p. 6). He quotes Rothbard’s reason thus: ‘[A]s the Soviet Union collapsed, it became clear that ethnic Russians had been encouraged to flood into Estonia and Latvia in order to destroy the cultures and languages of these peoples.’ Not a bad reason. It could be supported by other examples of regimes that have used the demographic weapon, such as China in Tibet or Indonesia in West Irian. The extraordinary thing is that Mr. Berg offers no comment after quoting Rothbard. It is as if the concepts being used, ‘ethnic’ and ‘destroy the culture and languages’ failed to register. But they are real.

“The democratic process has been prevented from correcting our maladaptive immigration policies due to bipartisanship – a long-term deal between the major political parties to keep immigration issues off the table at election time. The collusion began responsibly enough as a measure to facilitate assimilation during the massive post-WWII immigration program from Europe. By the 1970s bipartisanship served to shield both parties from majority objections while they profited from multicultural politics, garnering votes from immigrant communities in exchange for immigration favours. Arguably this collusion would have been difficult to sustain if a substantial number of academics and commentators had spoken truth to power.”

Given the bi-partisan liberal consensus on civilisation defining issues such as these, the work of social scientists like Frank Salter is quite simply invaluable. This short book is commended to our readers, who will undoubtedly find it informative and enjoyable.

Quote of the Week: Jesse Helms, “The Ramparts We Watched”