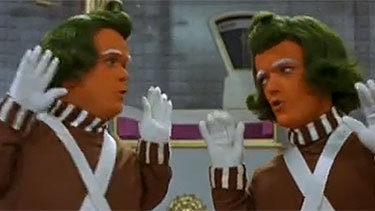 When the avantguard becomes the vanguard: the Foreign Minister in Parliament.

To become a Minister of State, one has to be a cultivated professional with years of experience, and most importantly wisdom, strong character, a proven ability to both lead and serve the public interest, a natural disdain for cliched and solganistic rhetoric, and as a result, the courage and desire to address controversy without pandering to the prejudices of mediocre minds. But of course this is absolute nonsense. We live in a mass liberal democracy, after all. Infantelised, mindless, deracinated.

ABC24 reports today that our Foreign Minister, Julie Bishop, attended the offices of French pornographic magazine Charlie Hebdo and presented, someone, with a satirical comic drawn for the Australian press in response to the terrorist attack earlier this year. Charlie Hebdo has now apparently been consecrated to the god of modern liberalism by the entire mainstream political spectrum. Australia’s representative abroad, your moral and political better, was reported as saying that the magazine, was one where “nothing is sacred” and that “if you don’t like it, don’t buy it, don’t read it.”

Since the faux-right remains somnambulist to the fact that the ideological left today is the establishment, conservatives’ well meaning yet utterly clueless ignorance renders them little more than tools of modern progressivism. Bishop’s pearls of wisdom, which fell from her mouth at the office of Charlie Hebdo, is but another example of the drooling moronism passing for statesmanship today. It should anger us, not not surprise us one bit.

“If you don’t like it, don’t buy it, don’t read it.” The advice of a part time public school deputy head mistress. We do wonder however, whether Bishop’s logic might work for a defendant protecting his freedom of speech and satire before a “human rights” tribunal, or whether it would work as a successful response to an accusation of “hate speech”. But of course that is nonsense. We live in a mass liberal democracy, after all. Liberal paradigms of equality and freedom only work one way, and there is no better spokesman (sorry, spokeswoman) to prove that fact than a representative of an allegedly mainstream conservative political organisation.