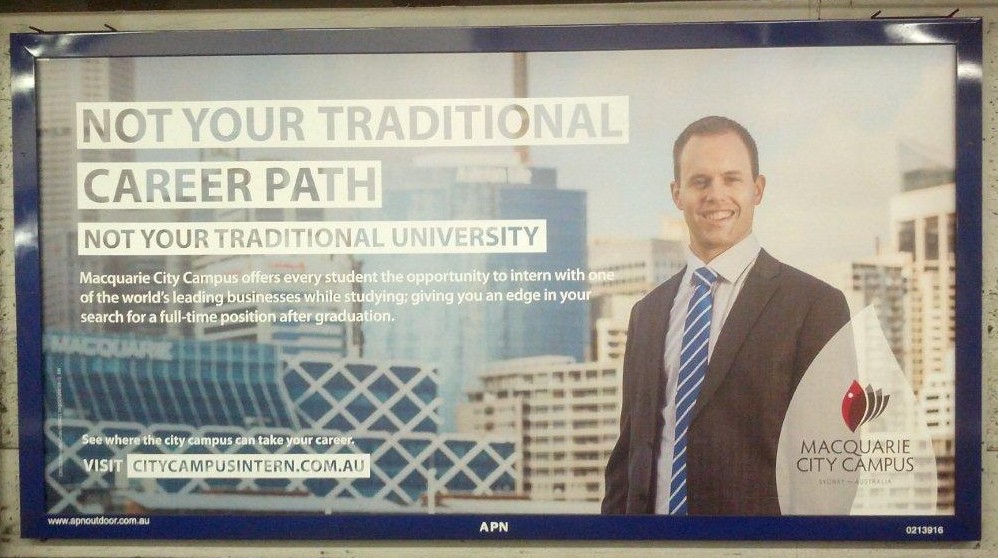 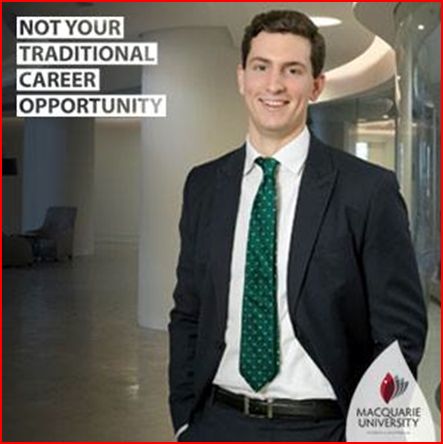 Some would regard it as a brilliant piece of modern advertising. It is personal, crisp, direct. It carries a simple and effective message: “Oh come all ye young aspirants and let us give you the keys to success as a global citizen!”. It relies upon factual success rather than just sloganeering. It presents a real picture that each young aspirant can relate to.

Why on earth then, would this crusty old conservative seek to critique it? The answer is simple: it is a well orchestrated liberal lie that perpetuates the current cultural malaise. I have no doubt that the institution will be very good at preparing students for the brave new globalist world. I have no doubt that skills will be imparted to the student that will make them highly successful – just as the advertisement claims. My concern lies however, with why a university would want to do such a thing?

Before we take a look at the big picture – let us take a look at the small one. What do we see here? Well, firstly we have a very clear announcement (with the brief wording) that Tradition is out the window. Apparently there is something praiseworthy of transcending tradition to some ‘other’ place – a place where tradition cannot help you. It seems all about career – the other key word. In this rather businesslike approach, we see another clear statement. University here isn’t about higher learning, it isn’t about awakening the mind to deeper things, it isn’t about being a part of an elite or an aristocracy of the mind – it is about the material success of career. After all, education is a business isn’t it? The last key word is “opportunity” – seemingly innocuous, but in this context it marries perfectly with the liberal mindset. In the never ending pursuit of perfection, opportunity is everything. It is the atomistic individual reaching for his ‘maximum potential’ and achievement that will bring about the eventual perfection of society as we head towards an era of global liberal democracy, where the gods of science will save us all from those pesky inconveniences of life, such as disease and injury, perhaps, in time, even ageing. Opportunity in this context isn’t about concepts such as ‘virtue’ and ‘polis’, it is about getting one’s leverage, one’s ‘lucky break’ in the game of modern corporate life.

That is what the words tell us, but what about the picture which provides the other 995? The most striking item for the senses is the immediate environment. Other than the wish to have the eye flow on rather than halt, by introducing architectural curves, the environment is profoundly sterile. Beige gives way to shades of white, which (in an act of unconscious irony) gives way to sheer transparency in this modern panopticon. Where are we? Is it an office building? Is it a government department? Is it the university? Is it a modern art gallery or has our erstwhile graduate achieved a position in the Swedish ministry of agriculture? Is he in China? Chile? South Africa? Switzerland? Is he a banker? Accountant? Lawyer? Teacher? Engineer? Computer Scientist? A member of the Federal police?

In a version of the advertisement that provides more detail – we learn that our graduate is now working in the Sydney office of a very well known and highly reputable Australian law firm. Perhaps it was a deliberate choice for this photo (a device to focus upon the individual perhaps?) – but the environment is totally devoid of any symbol of culture or identity that alerts one to anything about the location, profession or heritage of the institution this young man has joined. This was probably deliberate as the image tries to focus upon the wonderful generic homogeneity of the world to come. The homogeneity achieved by the multiple attempts to push the notion of ‘diversity as strength’.

The fact that such a sterile picture is meant to excite and inspire the future generation of “cutting edge minds” should be of great alarm to any traditionalist.

Sadly, the features here are also typical of the institution itself. The architecture reeks of utilitarian form following function. A neatly arranged set of concrete blocks opened with glass panel and supported by steel. Coloured steel and plastic breaking the sea of grey  and white, so that the eye can obtain perspective and continue to guide the body in a straight line – for all we know it may even be an OH & S requirement. Some may say that the aesthetic, buildings and village atmosphere of universities built in other times, are no longer relevant. No one really pays attention (who ever heard of the ‘ivy’ league?) we will be told – what is primary, is function. I can hardly believe that poetry is inspired by the barren concrete pathways, and meters of endless steel in these modern functional structures – but then again, poetry doesn’t matter anymore does it? Who needs a creative muse when what matters is one’s capacity to conform to pre-written ‘systems’ and flowcharts to success?

This advertisement is very successful and striking. The agency has done very well. My qualm isn’t with the excellence of execution on the part of those who ‘sell’, it is with the direction of tertiary education and the subsequent impact that such will have upon the culture of this nation.