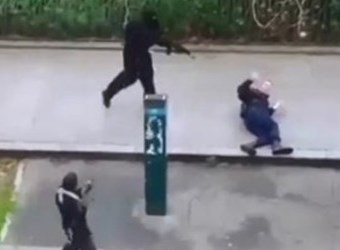 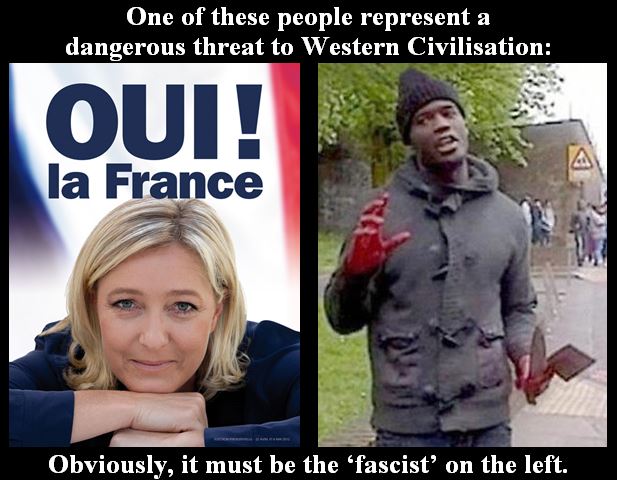 The response to the latest Islamist attacks against the West, this time in Paris, has become a familiar refrain. It is the same one used following the Sydney cafe siege last month1 and the Ottawa parliament shooting in October.2 According to French president François Hollande, the Paris attacks were conducted by terrorists and fanatics who “have nothing to do with the Muslim religion.”3 Unwilling to challenge Islam’s seeming monopoly on peace,4 Hollande’s bombastic rhetoric failed to mention the real causes of the Paris attacks, with decades of open borders and enforced multiculturalism being the most prominent.

But who can blame Hollande for towing the party line? Publicly criticizing Islam is not only likely to place one’s life in jeopardy, it will almost certainly lead to electoral suicide in a country where Islam is followed by almost one tenth of the population. On the other hand, towing the party line presents unbounded opportunities for organizing self-aggrandizing ‘unity’ rallies5 and summits,6 and sets the stage for the further consolidation of power and control by increasingly avaricious elites. Better protected from terrorist attacks due to extensive (and exclusive) security arrangements, elites have already capitalized on such low-probability events7 by invoking abstract fears of terrorism in easily misguided populaces to enact laws allowing the military to shoot and kill civilians on home soil,8 requiring the registration of user details in an internet cafe,9 and indiscriminate monitoring of global communications.10 When questioned about why Western countries have become targets of terrorism, the near-universal response is that there are people out there who “hate our freedoms.”11

In contrast to the recital of abstract threats as a danger to national security, the identification of specific and proven threats to national and personal security posed by certain groups of immigrants is routinely dismissed as Islamophobic12 and racist.13 Knowing that security threats to the state will not fundamentally alter the integrity and agenda of the establishment as it currently stands, mass, grass-roots opposition to the core tenets of establishment ideology is dealt with swiftly and boldly by all those with a vested interest in the status quo. That is why UKIP, a moderately anti-immigration party, was denounced by David Cameron as being full of “fruitcakes, loonies and closet racists”14 years before he became Prime Minister. And why the Swedish establishment recently formed a grand coalition15 against the Sweden Democrats, rather than risk an early election and haemorrhage more votes to the main party supporting indigenous Swedes over foreigners. It is also why Marine Le Pen, leader of France’s ever-growing National Front, was not invited to Hollande’s hashtag love-in following the Paris attacks.16 Such groups and individuals have the potential to disrupt the agenda of the establishment, as evidenced by the Northern League’s mayor of Padua announcing a ban on the construction of new mosques following the Paris attacks,17 and the Swiss People’s Party successful citizen-initiated referenda.18

Despite intense resistance by government, media and even churches,19 opposition to liberal establishment policies continues to grow. Pegida, a reactionary, German-based movement opposed to the Islamification of that country held its first rally in October 2014. Faced with exponential rates of attendance at their rallies,20 German Chancellor Angela Merkel’s initial response was to rush to the side of the immigrants,21 claiming that Germany needs them to cope with its looming demographic downfall (no pun intended). Such dismissal of popular sentiment will likely bolster support for the fledgling movement. Whether it will reach the level of support (and efficacy) achieved by the Orange Revolution in Ukraine or the Arab Spring in the Middle East remains to be seen. Nevertheless, movements such as Pegida deserve the support and solidarity of Europeans the world over who care about the future of their ancestral homeland.

If 2014 is anything to go by, 2015 will be another year in which Islam, Muslims and terrorism dominate world events and news. There can be little doubt that the Paris attacks, Sydney siege, Dijon and Nantes van attacks,22 Ottawa parliament shootings, and Belgium Jewish Museum23 shooting were all committed by Islamic fanatics who were emboldened by the rapid rise of Islamic State and its prospect of a caliphate to act on long-held grievances against their host, often native, country. As long as Islamic State remains a substantial force, elements of Muslims communities in Western countries (whether they be immigrants, native-born descendants of immigrants or Western converts) are likely to continue their attacks, concentrating on soft targets with a high publicity value. Our duty is to be alert to this scenario, to not be fearful, and to be ready to engage people with hard facts when the next attack takes place.