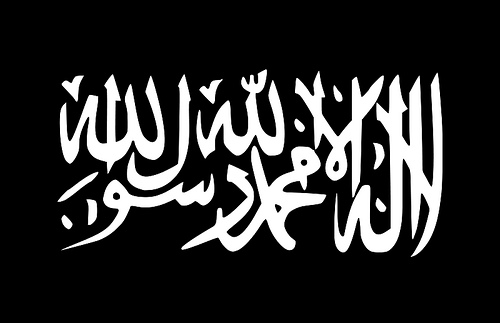 Hostages have been taken at Sydney’s Lindt Café on Martin Place. Islamist flags have been placed over the windows of the Café. Customers at the Café have been forced to face the windows, with their hands pressed against the glass. News reports on ABC24 are providing ongoing coverage. Welcome to Sydney, Australia, post-Diversity (PD).

Why is it that the reporters on the ABC constantly and continuously keep referring to this event as “unbelievable”? Does it really defy belief? Those of us in the Sidestream or “Outer Right” have been repeatedly warning the political establishment and the mainstream commentariat about the dangers of multicultural, universalist liberalism for decades. While the political and cultural establishment keeps pretending that there is no essential difference between cultures and people, while they all pretend to believe that we can import acutely alien cultural blocks into our suburbs without event (other than “enriching”  society) while they indulge in these idiotic fantasies, reality occasionally bites back.

Enoch Powel warned his country about similar dangers in the 1960s, about half a century ago. His prophesies seemed to have been morbidly fulfilled with the violent murder of Fusilier Lee Rigby in broad daylight, only last year. That, of course, was just the most gruesome symbol of London PD, and yet “Enoch Powel” remains a dirty name and his warnings are a taboo subject in polite society. Here in Australia, our citizens have already been targeted by Islamic militants, both overseas and at home. The fruit of politically correct policing culminated with the Cronulla riots of 2005, the same year of the London Tube bombings. And what has changed? The politically correct Mullahs of the mainstream keep denouncing criticism of progressive policy as “racist”, “bigoted”, “intolerant”, “Islamophobic”, et cetera, ad nauseum.

What we are now facing, on Martin Place, Sydney, is the immediate result of a fanatical ideological commitment by leftist governments (of both major parties) to dangerous utopian conceits. We covered this budding problem in 2012, when Islamists displaying jihadist paraphernalia marched in the streets of Sydney,1 and one year later when attendees at a similar march showed just where their cultural and political loyalties actually lie.2 Yet our current national leaders – who many voters still believe are somehow “conservative” – remain dedicated to maintaining the progressive status quo.3 Indeed, they are more concerned about transgressing leftist taboos than providing an effective opposition to leftism. Evidently, losing votes among even hostile electoral blocs weighs more heavily on their political conscience.4

The media (and predictably, the political class) will express “shock, shock” at this logically predictable development. And these good-thinking, enlightened fools are supposed to be our moral and political betters, while we are “backward”, “anachronistic” and “divisive”. Those who have been voicing dissent on this issue are not the ones who are “divisive”, or who pit “Australian against Australian”. The dangerous, divisive element of Australian society marches under black flags, not under the Union Jack. It should be abundantly clear now that there is more to being an Australian than merely holding a citizenship certificate, or enjoying a game of cricket, or going to the beach.

A healthy society is one whose priorities are set straight. We will be interested to know whether our leadership’s reaction to what is developing on the streets of our state capital will reflect or repudiate the endemic moronism of those who believe that “as horrific as this tragedy was, if our diversity becomes a casualty, I think that’s worse”.5 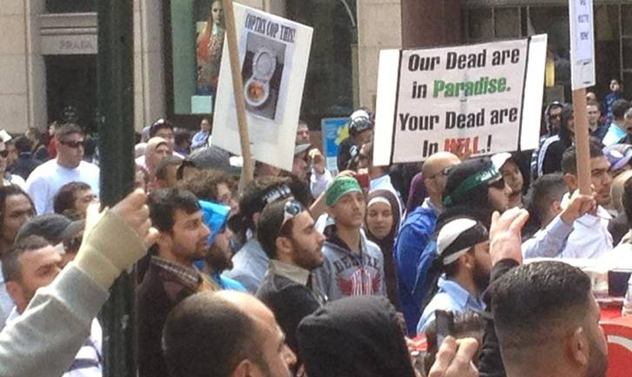 Islamic “protest” in Sydney, 15 September 2012. Note the jihadist banners wrapped around the heads of some of the protesters. This photo was taken by one of our correspondents on the scene. For more information, see link at endnote 1 below.

Islamic “protest” in Sydney, 9 September 2013. Note the banners flown by participants: the black flag and white flag used to denote Muhammad and the Sharia State. This photo was taken by one of our correspondents on the scene. See link at endnote 2 below.

2 Comments on "Progressives are “Shocked, Shocked!”"